Flooding in the Murrumbidgee River, following heavy spring rains, has led to an emerging situation of low dissolved oxygen levels in the water, including reports of isolated native fish deaths between Maude and Balranald. 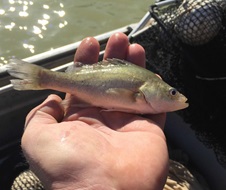 The NSW Office of Environment and Heritage is helping with a response by approving the use of an Environmental Water Allowance (EWA) to help native fish recover from low-oxygen stress.

“This group is made up of representatives from DPI Water, DPI Fisheries, WaterNSW, Riverina Local Land Services, the Murray Darling Basin Authority, Commonwealth Environmental Water Office and the NSW Office of Environment and Heritage,” he said.

“The group is monitoring the situation and meeting regularly to discuss options to help mitigate potential impacts from low dissolved oxygen, or hypoxic, levels.

“The EWA will be used to maintain a steady in channel base flow downstream of Maude as the current flooding subsides.

“While there have been some reports of fish deaths, there are also reports of native fish including Golden Perch successfully refuging in floodplain lakes which were filled with Commonwealth and NSW held environmental water prior to the hypoxic blackwater flooding issues,” he said.

WaterNSW spokesperson Tony Webber said up to 150 gigalitres (GL) of EWA water is being released, at a rate of approximately 5GL per day.

“The combined total being released from Burrinjuck and Blowering Dams is now 11GL per day, of which almost half is to address water quality issues caused by the natural flooding, with the remainder intended to meet growing irrigation demand downstream.

“The releases will also create capacity within the dams to capture future inflows and thereby mitigate any further flooding. These inflows will be stored and potentially be available to customers and other licenced users,” Mr Webber said.

Ongoing monitoring will inform the duration of the EWA water release. The combined environmental and irrigation releases will be managed to stay well below minor flood level at all locations.