We want your feedback on popular Glenrock’s plans 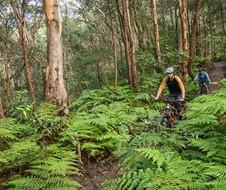 'Given the huge community interest, we’re looking forward to receiving feedback on the draft plans.

'This is about balance – we need to protect Glenrock’s cultural and natural values, while supporting recreational activities that are safe and don’t damage the environment.

'Glenrock is a conservation area in the traditional Country of the Awabakal people, and forms part of a rich cultural landscape cared for by Aboriginal families and groups for thousands of years.

'It is also home to five threatened ecological communities, including littoral rainforest and 10 threatened animal species such as the squirrel glider.

'We propose to minimise impacts from the new network by using already disturbed areas wherever possible, such as easements and powerline corridors.'

Glenrock SCA is listed on the State Heritage Register for its evidence of the early coal mining history.

Plans of Management are legal documents NPWS develops and maintains to guide how a park will be sustainably managed.

NPWS has committed over $2 million to enhance walking tracks and upgrade visitor facilities in Glenrock SCA, as part of the NSW Government’s largest investment in national parks history with $450 million for more than 200 visitor infrastructure projects.

National parks provide a huge boost to the visitor economy in the Hunter region, generating $618 million per year in economic activity and supporting more than 420 jobs.

The Draft Plan of Management proposes: