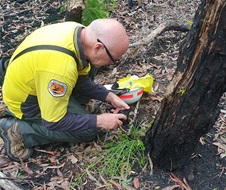 “This is good news following the fires. Fresh regrowth is lifting the spirits of staff assessing our parks, and they’re encouraged to see these weeping paperbarks starting to bounce back,” Ms Brooks said.

“New leaves are shooting from these trees’ bases, trunks and some branches. With 97 per cent of Bungawalbin National Park affected by fire, it is heartening to see nature reviving.”

While early monitoring of the weeping paperbark – or Melaleuca irbyana – shows leaves re-sprouting, it is too soon to know the extent of the recovery of the population.

The Saving our Species (SoS) team will monitor the site for up to two years, providing input to the NSW Flora Fire Response Database.

In NSW the weeping paperbark is isolated to two major coastal floodplains in north-eastern NSW, while a third population is in south-east Queensland.

Already, monitoring shows these trees can withstand fires of low-to-moderate intensity, and staff are now looking to see if seedlings will follow. All data will also feed into a better understanding of fire regimes, which will help support decisions around hazard reduction burning.