Environmental flows down the Darling Anabranch from Lake Cawndilla have converged with the Murray River downstream of Wentworth creating a fish highway not seen for three years. 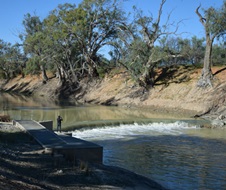 Graeme Enders, South West Regional Director at the Office of Environment and Heritage (OEH) said around 70 gigalitres of environmental water has been released since mid-February and now connects the lake to the Murray River.

“It’s been three years since the Darling Anabranch received environmental flows and already we are seeing high numbers of juvenile golden perch moving into the main river,” said Mr Enders.

“News that the flow had converged with the Murray was confirmed by landholders who have been monitoring the movement of water across their properties.

“It’s been a true community, collective monitoring event where each week we received updates, photos and videos from landholders along the Anabranch announcing that the water had arrived.

“OEH has since engaged the services of the Murray Darling Freshwater Research Centre to determine fish movement along the length of the Anabranch by tagging fish and tracking their movements via receivers at various fish ways,” Mr Enders said.

The water has been sourced from Commonwealth environmental water and NSW water holdings and will slowly wind down as other system users start their irrigation regime.

“It’s important we take the opportunity to move water through different parts of the system at the right time, to help native species such as golden perch to reach into newly accessible habitat to survive and thrive.

“This means the benefits extend beyond the local environment—in this case upstream and downstream through the Murray system,” Mr Papps said.

Irrigators, landholders and recreational fishers were taken on a tour of the Anabranch and earlier this week with OEH, the Department of Primary Industries Fisheries and the Commonwealth Environmental Water Holder.

“With the Anabranch being dry for so long it is so good to have water in front of our house, and see the birds, fish and plants that come with the flows,” Mr Whyte said.

“The fact that the Anabranch is now connected to the River Murray is just wonderful and I’m sure the yabbies and fish are happy as well,” said Mr Whyte.

Book early for limited tickets to visit the majestic Muogama...