Celebrate the start of the whale season by joining the NSW National Parks and Wildlife Service (NPWS) and ORRCA (Organisation for the Rescue and Research of Cetaceans in Australia) on Sunday 30 June for the official whale census. 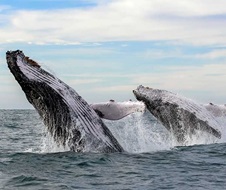 The whale census, which is conducted by ORRCA, will run from dawn until dusk across the country. There will be NPWS staff and ORRCA members at locations in coastal national parks around NSW, as well as key locations in Victoria, Western Australia and New Zealand on the same day.

"As the whale season gets underway, the information gathered will help us get a 'snapshot' of whale movements and behaviour around Australia," said ORRCA Second Vice President, Jools Farrell.

"This data will be analysed and used by ORRCA to understand more about these wonderful animals, such as their population growth levels, and how we can best protect them now and into the future through measures such as sustainable fishing practices, and public education."

"The northern Humpback Whale migration is in full swing with pods being regularly sighted passing the NSW Coast."

"The Humpback Whale is listed as a threatened species in New South Wales. We see that the population is steadily increasing at a rate of about 10% per year, and numbers are predicted to reach an excess of 35,000 this year."

"This census would also not be possible without the support of NPWS and our volunteers," said Ms Farrell. "ORRCA is the only wildlife carers group in NSW licensed to assist NPWS with marine mammal rescue, rehabilitation and release."

"Visitors have the opportunity to contribute to this important research by volunteering their time to join the count."

Sighting data log sheets are available at ORRCA – just head to your local headland and start counting on the day.

To start your own coastal adventure, and to find out about whales and the best whale-watching spots in our national parks, visit Wild About Whales.

You can also share your whale sightings on Twitter with the @wildaboutwhales community using #whaleon, log the sightings via our mobile app, "Whales NSW", and check out where the whales are with the map on our website.