Eagle-eyed whale watchers have counted a record number of whales migrating north along the NSW coast since the volunteer count began in 1998, Environment Minister Gabrielle Upton said on Monday, 7 August. 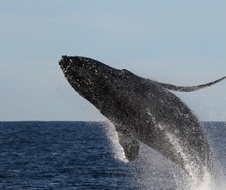 "We had a bumper number of sightings this year. The most number of whales ever counted in one day was also recorded on 26 June after 224 whales were spotted," Ms Upton said.

Humpback whales dominated the count. Only two southern right whales were spotted during the 2017 season, along with 17 minke whales.

The data is collected to help estimate migrating whale populations. Experts estimate around 30,000 humpback whales alone will migrate north along the NSW coastline this year to head for warmer waters before returning between September and November with their newborn calves.

Ms Upton thanked the group of 16 volunteers who count the northern migration of the humpback whales from the end of May until the end of July each year - this year they are celebrating 20 years of counting.

"These trained community volunteers dedicated more than 2000 hours of their time to the whale count program this year," Ms Upton said.

Volunteer Wayne Reynolds, who has a background in volunteer whale rescue, has been involved in the project for 20 years.

"Cape Solander is a real focal point for community education about whales and it's been wonderful to be part of a close knit group of loyal volunteers," Mr Reynolds said.

"We're now seeing thousands of humpbacks pass by Cape Solander every winter, and it's also been a thrill to see the occasional blue, southern right and killer whale over the years," he said.

The whale distance regulations for boaters is to stay at least 300 metres from a whale with its calf and 50 metres away from adult dolphins.

Log on to the Wild about Whales website to see the other regulations: NSW National Parks: Wild About Whales: Approach zones

Stranded, entangled, or sick whales should be reported immediately to the NSW National Parks and Wildlife Service Environment Line on 131 555 or ORRCA (Organisation for the Rescue and Research of Cetaceans in Australia) Whale and Dolphin Rescue on 02 9415 3333 (24 hour hotline).

Drones and phones: technology zooms in to help Saving our Sp...

Summer of surveillance, surveys and sniffer dogs in Kosciusz...

Cane toad sausages on the menu for native wildlife

Aerial baiting for wild dogs continues across the Southern R...