After the devastating fires of 2019–20, Barren Grounds Nature Reserve and Budderoo National Park have become even more important homes for wildlife. 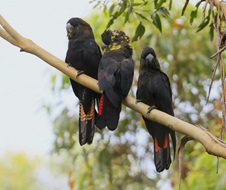 In early January 2020, the threat of bushfires had become a backdrop to everyday life on the NSW South Coast. The Green Wattle Creek fire had been burning for months to the south west of Sydney, its steady creep southwards held at the Southern Freeway. The Currowan fire, which started on the NSW far south coast, was raging northward due to strong southerly winds and hot, dry conditions.

Positioned between both fires sits the Budderoo Plateau, one of the most significant ecological locations in New South Wales. Home to Barren Grounds Nature Reserve and Budderoo National Park, as well as countless rare and endangered plants and animals, Saving our Species (SoS) and NSW National Parks and Wildlife Service (NPWS) staff watched with bated breath as the fires crept closer from both directions. 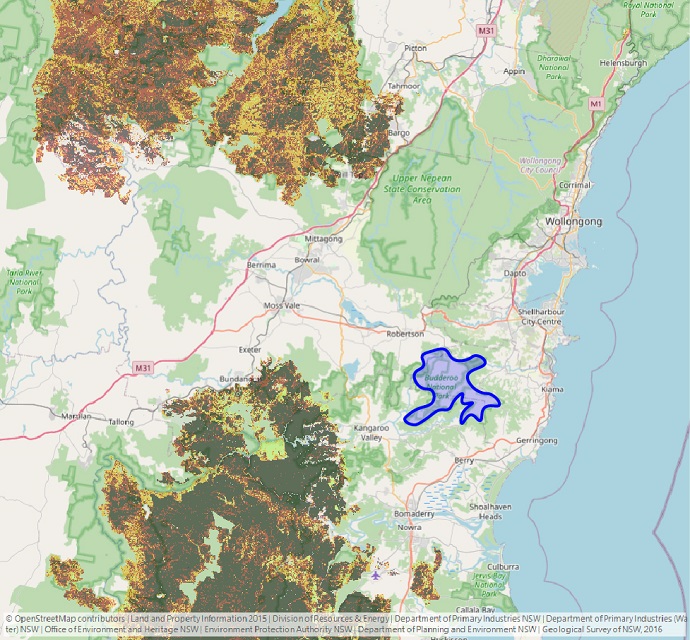 A combination of luck, good management and easing conditions ultimately protected the plateau from devastation. However, in the wake of these massive fires, Barren Grounds and Budderoo are proving to be more important than ever.

The Budderoo-Barren Grounds Plateau is so ideal, it’s almost unbelievable it exists in the first place.

The flat-topped sandstone plateau is surrounded by sheer cliffs, giving it an island-like position. It’s pretty high up (around 650 metres above sea level) and is nestled close to the coastline, which makes it one of the highest rainfall areas of New South Wales. This is thanks to a process called orographic rainfall, where rain is produced by moist air from the ocean lifting over a mountain, or in this case, an escarpment. Punctuating the landscape is an assortment of lush, tall open forests, dense shrubs, woodlands and swamps. This combination of physical isolation, high rainfall and diverse vegetation has created one of the richest animal communities in New South Wales.

Quickly recognised as a haven for threatened species, Barren Grounds was established as a fauna reserve in 1956, the third of its kind in New South Wales. The reserve, along with the adjacent Budderoo National Park, is home to over 16 threatened species including the:

Not all habitats are equal – some can support a huge range of rare and endangered plants and animals, while others can’t.

One factor that makes Barren Grounds and Budderoo home to so many threatened species is high habitat complexity. Habitat complexity describes the physical structure of an ecosystem. The more complex a habitat is, the greater the variety of plant species, hiding places, food sources and other resources available to the animals that live there. When you add a variety of different complex habitats together in one landscape, such as heaths, woodlands, upland swamps, tall forests and rainforests, the effect is further magnified. Having lots of choices means many animals can coexist in an area, because there’s something for everyone – which is the case with Barren Grounds and Budderoo.

This high complexity of habitat and plant life requires great attention to detail when it comes to the management of these areas. The excellent and long-standing management of these reserves by NPWS and the SoS program is one of the reasons they support thriving populations of so many rare threatened species. To lose such an important place would be a huge setback for threatened species conservation in New South Wales.

The importance of refuge

While nothing can take away the devastation of the recent fires, we’re incredibly lucky that some significant sites, such as Barren Grounds and Budderoo, remain untouched. As the surrounding landscape begins the slow process of recovery and regeneration, these unburnt refuges are really proving their worth.

For starters, they act as direct ‘protectors’ of species diversity. Monitoring by the SoS program tells us that all threatened species within Barren Grounds have healthy populations, despite the destruction that occurred further afield.

While populations outside of Barren Grounds and Budderoo must face the challenges of life after fire, we can rest assured that those species inside these reserves remain robust and healthy.

Unburnt refuges can serve as the source for many species to repopulate burnt landscapes. As the fire-affected areas that surround the Budderoo-Barren Grounds Plateau recover, animals that originated in Barren Grounds and Budderoo will move into these areas to make their new home in the recovering habitat.

Patches of unburnt habitat also provide refuge for some species that have had important parts of their habitat destroyed. Endangered glossy black cockatoos are flocking to Barren Grounds and Budderoo after large areas of she-oaks (their only food source) were burnt in the north (Nattai National Park) and the south (Morton National Park). These birds have only been recorded in the reserve once before, and that was in 1992, so to see them using the habitat now is very exciting!

The devastation of fire can also highlight the value of keeping and maintaining as much habitat as we can – whether that be a national park, nature reserve or bushland on private property. Every little bit that remains untouched by fire is now helping in the recovery of the wider landscape and its diverse ecosystems.

A process of recovery

It’s also important to recognise just how resilient Australia’s ecosystems are to wildfire. Even within the worst-burnt areas, SoS and NPWS staff are finding evidence of survival, recovery and regeneration across the State.

Bushfires are a natural process, a part of Australia’s landscape that our plants and animals have co-evolved with over millions of years. Fire becomes an extinction threat when these species have already been pushed to the brink, or when extensive habitat is cleared, leaving only a small amount.

That’s why national parks and nature reserves, such as Barren Grounds and Budderoo, are so important. They are vessels for the survival of precious threatened species and crucial habitat types in the face of such natural disasters.

What is the difference between a nature reserve and national park?

Both are primarily to protect and conserve areas of outstanding, unique or representative ecosystems, species or other natural phenomena and places of cultural and historic heritage significance. The main difference is that national parks also provide opportunities for public appreciation, inspiration and sustainable visitor enjoyment. Nature reserves have a higher focus on conservation and less focus on public enjoyment.