The most recent survey of waterbirds in the Port Stephens area shows an alarming decline of once-common birds over a 10-year period. 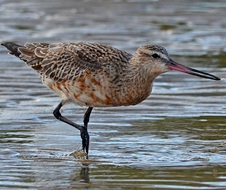 The Office of Environment and Heritage surveys local wading birds and shorebirds twice a year in summer and winter, in conjunction with Hunter Bird Observers Club.

"This is our 15th bi-annual survey and while it is hard to say whether the decline is due to local factors in Port Stephens, the trend downwards over the past 10 years is both sad and alarming.

"In general numbers were low for both Australian resident shorebirds as well as migratory birds, but any real decline would only be confirmed by future surveys," Mr Bond said.

"One of the most endangered shorebirds, the Pied Oystercatcher, listed as vulnerable to extinction under the Environment Protection and Biodiversity Conservation Act 1999 (the EPBC Act), recorded 154 sightings in July 2008.

"Numbers were low but reasonably stable until this year when they crashed to just 92 birds.

"Other species such as the Bar-tailed Godwit numbers have almost halved over a decade and the increase we have observed in any of the species counted was very small," Mr Bond said.

Shorebird counts are carried out across Australia at around the same time to estimate national populations and track trends.

The winter survey indicates the success of the previous year's breeding season and Port Stephens is well known to be a significant site for shorebirds in New South Wales.

For some species, such as the Eastern Curlew it is considered nationally or internationally important.

However, Alan Stuart from Hunter Bird Observers said one good news story from the results was an increase in successful breeding amongst the critically endangered Beach Stone-Curlew.

"There has been a pair of Beach Stone-Curlews breeding in the area for several seasons now and last season we found a second nest," he said.

Many of these endangered shorebirds, especially the Pied Oystercatcher are presently breeding on Port Stephens beaches and beachgoers are urged to tread carefully as chicks and eggs are at risk of being accidently crushed by people and their dogs.

"The eggs and chicks of most shorebirds are almost perfectly camouflaged and laid in open sand, so it's essential that anyone walking at this time of year avoids bird nesting areas," Mr Bond said.

"Shorebirds are also vulnerable to entanglement in abandoned fishing line. People can help by collecting and appropriately disposing of discarded fishing gear.

"Birds exhibiting behaviours like shrill calling, swooping and other diversional behaviours, indicate it is most likely that people or dogs are too close to the chicks or nests," he said.

If you identify a nesting pair of Pied Oystercatchers or any other shorebird over coming months, please register your sighting with the NPWS by calling: 02 4984 8200.