Winter's arriving which means it's a great time to enjoy a bushwalk at Royal National Park in cooler temperatures for birdwatching and to experience nature's stunning show of wildflower blooms. 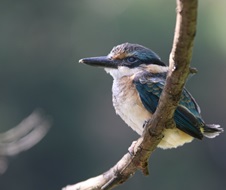 "The wildlife in Royal is very busy in winter," Mr Croft said.

"I regularly see New Holland Honeyeaters with their distinctive yellow wing patch flitting around the coastal heathland searching for nectar and insects.

"Royal is also home to the colourful Azure Kingfisher. If you're extra lucky you might spot one of these uncommon birds with their deep royal-blue feathers, violet sheen and unique orange stripes on each of its sides.

"The Azure Kingfisher prefers freshwater habitats along rivers so you might find them along the Hacking River, upstream from Audley."

More than 300 species of birds have been recorded at Royal National Park. This natural haven is also home to thousands of wildflowers including colourful Waratahs, giant red flowered Gymea Lilies and coastal heath species.

Mr Croft said the plants flowering in June at Royal National Park include the Acacia suaveolens and Banksia serrata, both yellow flowers and the Correa alba and Epacris longiflora.

"There are also numerous bushwalks through the park's different vegetation communities where you can see native plants and experience the sights and sounds of winter," said Mr Croft.

"One of the park's oldest bushwalks is the Lady Carrington Drive which is an easy walk where you'll often see Lyre birds and towering turpentine trees, a relative of the eucalyptus which can sometimes grow as tall as 60 metres high.

"Pack drinking water, sunscreen and a map from our visitors centre to enjoy a beautiful winter's day surrounded by nature."