An ambitious project to better preserve the so called "dinosaur tree" – the Wollemi Pine – has blossomed and is sprouting in a secret location. 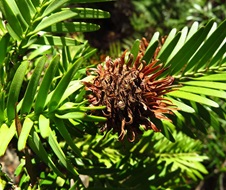 "There are only 4 stands of the rare pine growing in remote canyons, so the establishment of a flourishing "insurance population" is a real win for the environment," Environment Minister Gabrielle Upton said.

"The top-secret insurance population is now naturally producing cones and seeds, marking an exciting new step towards securing the survival of this ancient iconic plant.

"Creating a self-sustaining insurance population will ultimately boost numbers to secure species in the wild.

"The NSW Government invested almost $200,000 under its Saving our Species (SoS) Program towards securing the Wollemi Pine.

"It's one of the world's oldest and rarest plants from the time of the dinosaurs and there are less than 100 trees left in the wild," Ms Upton said.

"It's critically endangered in NSW and an Iconic Species under the SoS program, so these extremely positive early results are a real win for an extremely dedicated team of botanists and scientists," Ms Upton said.

Dr Cathy Offord, Principal Research Scientist at The Royal Botanic Garden Sydney who has been studying the Wollemi Pine since its discovery in 1994, says the insurance plantation is doing better than those growing in the wild.

"Some 83% of the insurance Wollemi pines are surviving and have increased in size by up to 37% making them mature enough to produce potentially viable seed much earlier than expected," Dr Offord said.

"We've now collected around 60 viable seeds which are being used to find the best way for them to grow on their own.

Dr Heidi Zimmer, Senior Scientist at the Office of Environment and Heritage says the production of cones indicates very positive results for the population and the species as a whole.

"It means we've got the science right and there is now a strong possibility that this insurance population may become self-sustaining."

The Wollemi Pine translocation is a collaboration between NSW Office of Environment and Heritage, The Royal Botanic Garden Sydney, National Parks and Wildlife Service the University of Melbourne (UoM) and Western Sydney University (WSU). Conservation of the Wollemi Pine is funded by the NSW Government's Saving our Species (SoS) program which aims to reverse a decline in the number of threatened species in NSW.

In September 1994 David Noble, an officer with the NSW National Parks and Wildlife Service, discovered what we now call Wollemia nobilis or the Wollemi Pine. The Wollemi pine (or a very similar relative) was previously known from fossils, and so the term "dinosaur tree" was coined. This tree was thought to have evolved 200 million years ago, disappearing from the fossil record (pollen) 2 million years ago. Because of its uniqueness, the Wollemi pine was a new species in a new genus.

Four stands of wild Wollemi Pines are found within a few remote canyons in the Blue Mountains, so the risk of losing the entire wild population in a single catastrophic event, like a fire or a disease outbreak is high. Establishment of a new 'insurance' population some distance from the original population reduces this risk. In August 2012, 191 Wollemi Pines were planted at a new site. This translocation site was chosen because it matched the warm temperate rainforest community characteristic of the wild site, and had land tenure that was secure in the long-term.