Working to save the Smoky Mouse

The smoky mouse performs an important role in keeping the forest healthy by aerating the soil, increasing water penetration and spreading the spores of the truffles in their droppings. 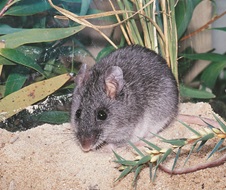 It carries out this role by digging for truffles in leaf litter and loose soil, and is helped by other small truffle-eating mammals such as bush rats, bandicoots and potoroos. The truffles form a symbiotic relationship with the roots of shrubs and trees, assisting them to take up water and nutrients.

Like many of our native rodents they have suffered a massive decline in abundance and are now very rare. They were only discovered as a live animal in NSW in 1993 and are listed as Critically Endangered in NSW and Endangered Nationally.

Actions funded under the SoS program for the next 5 years include increased feral cat control at Nullica and Kosciuszko and the initiation of a captive breeding and population supplementation program.

Additional surveys in new areas will also be undertaken with the help of a trained smoky mouse detection dog, with the hope of locating as yet undiscovered populations.