It was a tight race to the finish line – but we’re excited to announce the winner of the inaugural Saving our Species threatened NSW species of the year vote!

At Saving our Species (SoS), we want more people in NSW to know and care about our threatened plants and animals, so we recently asked you to choose your favourite. 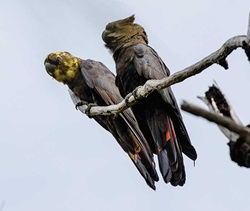 After thousands of votes, your Saving our Species Threatened Species of the Year has been chosen. Introducing, the glossy-black cockatoo!

Your winner: the glossy black-cockatoo

Help us celebrate this incredible bird by:

How the race went down

After a strong start, the mountain pygmy-possum was soon pushed out of the top spot by the 2 contending cockatoos. The gang-gang and glossy black-cockatoos were neck-in-neck throughout the voting period – but the glossy black managed to just stay ahead and ultimately claim the winning spot.

Honourable mention goes to the variable midge orchid which, despite being the only plant to feature in round 2 of the vote, and arguably the least known of the 10 species, placed in the very respectable fifth position.

Thank you for helping to bring some love and attention to our incredible NSW threatened species – your votes and excitement have helped to make this campaign a success.

The winners of our incredible prizes have also been chosen and will be contacted via email – so keep an eye on your inbox.

No matter where each of these species placed in the vote, and even if your favourite didn’t make the top 10, know that Saving our Species is working hard to conserve more than 400 at-risk plants and animals in NSW – including the ones you haven’t heard of.

Find out more about the Saving our Species program and how we’re securing a future for our threatened species.

Congratulations to our 5 runners up

Powerful owl
Scientific name: Ninox strenua
Conservation status in NSW: Vulnerable
Did you know? Young powerful owls remain with their parents for several months after fledging, and sometimes stay within their parents' territory for over a year.

Southern corroboree frog
Scientific name: Pseudophryne corroboree
Conservation status in NSW: Critically endangered
Did you know? This rare frog is only found in a very small area (about 400 sq kms) of Kosciuszko National Park. Adult frogs weigh up to a teeny tiny 3 grams!

Scientists encourage families to play 'I spy with my little ...