Welcome to the first edition of our newsletter. Find out what our research partnerships have discovered about the water quality of Thirlmere Lakes and what they are planning.

The 2018 Thirlmere Lakes Science Day, organised by the former NSW Office of Environment and Heritage, was held in June at Picton Bowling Club and aimed to bring the latest Thirlmere lake research to the community and other stakeholders.

Five researchers from each of the research partnerships gave an overview of their findings to date and what they are planning for the next year.

Associate Professor Tim Cohen of University of Wollongong and his team have cored and dated the sediments of Lakes Couridjah and Baraba and the sill between the two.

The sediments in Lake Couridjah date to beyond 50,000 years ago, but the modern Thirlmere conditions (the organic-rich peaty sediments) started about 10,500 years ago.


Tim and his team found distinct variations in the lake sediments at Lake Couridjah that show that there have been major drying intervals in the past.

The team has been taking advantage of the dry weather and coring Lakes Werri Berri and Couridjah and will be targeting Nerrigorang over summer.

The severe drought that New South Wales is currently experiencing is having quite an impact on the lakes, not only in terms of water levels but also on the research. OEH scientists visited the lakes in late August and found only Couridjah and Baraba had surface water in them. Martin Krogh of OEH’s Science division said Lake Couridjah was the driest he has seen it.

The drought is a valuable opportunity to gather accurate topographic information for the team at UNSW’s Water Research Laboratory, but they are hoping for rain soon because it’s hard to get an accurate water balance budget without water inflow for a prolonged period.

Dr Dioni Cendon from the ANSTO team has observed that the drought is having some unintended results in the characterisation of the lakes. He is getting some very solid evaporation trends – to dryness.

On the upside, these conditions give researchers an opportunity to investigate the lake beds more easily. Surveys using ground penetrating radar and other geophysics along the Nerrigorang and Werri Berri lake edges were done by UNSW’s geology team in August. They are planning another geophysics campaign this November if it’s still dry.

Dioni Cendón and Mark Peterson of ANSTO are using isotopes and environmental tracers to investigate lake water losses. They’ve found that each lake has its own unique isotopic signature that allows them to measure recent evaporative losses. 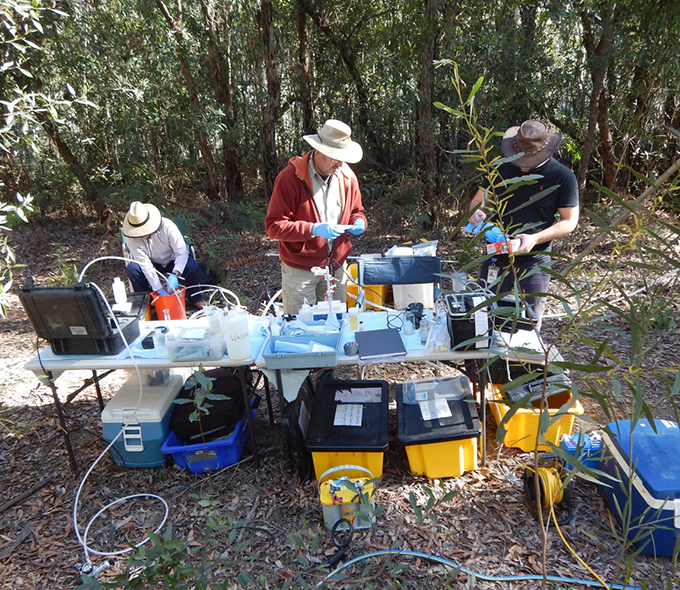 Associate Professor Martin Andersen from UNSW’s Connected Waters Initiative has found that Lake Couridjah is connected to a shallow groundwater aquifer between Lake Couridjah and Lake Baraba. However, Lake Baraba is not connected to this aquifer but sits above it. Martin stresses that these are preliminary findings and his team expects to have more comprehensive data from pressure loggers installed in the piezometers (instruments that measure pressure in a particular way) in the near future.