We protect, respect and conserve Aboriginal cultural heritage in NSW. 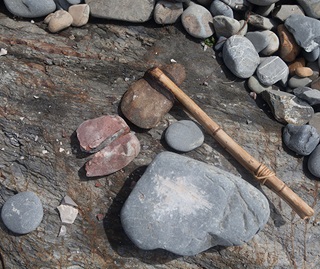 Aboriginal cultural knowledge provides crucial links between the past and present and represents an essential part of the identities of Aboriginal people and all Australians.

Aboriginal cultural heritage includes tangible and intangible values, such as Song Lines, Dreaming stories and ceremonies passed from generation to generation, as well as physical objects and places. These important objects and places provide evidence of the diverse values, activities and knowledge of Aboriginal people who co-existed with the natural environment by living in harmony with the land they cherish and, which the Aboriginal communities now manage and protect for future generations.

Aboriginal objects provide physical evidence of the use of an area by Aboriginal people.

Physical objects could include items such as stone, wood and shell artefacts that were used to make tools, weapons and implements. They could include fish traps, stone arrangements, middens, scarred or carved trees and sites of occupational fringe camps that still exist today.

If you find or believe you have found an Aboriginal object or site, you should report it to the Heritage Information Management Team:

For an area of land to be declared an ‘Aboriginal Place’, the Minister is required to formally and legally recognise that the place is, or was, of special significance to Aboriginal culture.

When a significant place is declared an Aboriginal Place, it is protected under the National Parks and Wildlife Act 1974.

Aboriginal objects and places can be declared on public or private land, and do not change the land tenure. Landowners or land managers are encouraged to prepare a management plan to guide the management of Aboriginal Places.