2011 NSW woody vegetation extent: how the maps were created

The source data was SPOT5 High Resolution Geometric (HRG) satellite imagery. It consists of 4 multispectral bands (10 m pixels), and a panchromatic band (2.5 m pixels). A time series of one image per year for the period 2008 to 2011 was acquired during dry periods where the contrast between woody vegetation and the ground cover is high. A total of 1256 images were used. The images were registered with ground control. The multispectral imagery was corrected for atmospheric and bi-directional reflectance effects and sharpened to 5 m pixels using the panchromatic imagery. The images were masked for cloud, cloud shadow, topographic shadow, and water. 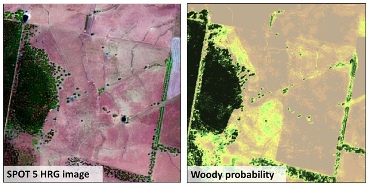 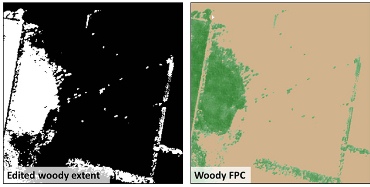 Creation of the woody extent and FPC maps (left to right, top to bottom):
SPOT 5 satellite imagery is acquired and pre-processed;
woody pixels are detected by applying a probability model;
the probability layers are edited by trained analysts;
the woody pixels are attributed with FPC.

Detecting woody vegetation in the images

Woody foliage protective cover (FPC) is the fraction of the ground that is obscured by green leaf. An estimate of FPC was derived for every clear pixel in every image. This required a multiple linear regression model that related the multi-spectral reflectance to a reference data set of FPC. Each pixel contained up to 5 observations of FPC and reflectance over time.

The probability of a pixel containing woody vegetation was determined using a binomial logistic regression model. The model parameters were the mean FPC, mean red reflectance, variation in FPC over time, and the climate variable vapour pressure deficit. The model was trained using 25930 observations of woody vegetation presence or absence. These points were interpreted from ADS40 aerial imagery where available (0.5 m pixels) and SPOT5 HRG panchromatic images (2.5 m pixels).

Woody vegetation extent was mapped by applying a threshold to the probability images, with further editing by trained analysts. The mean FPC value over time was used to attribute each woody pixel.

Two comparisons with independently-derived datasets of woody-vegetation extent were performed. The first comparison used reference data derived from airborne Lidar collected across a range of vegetation formations, that had been related to data collected on the ground.  90.1% overall accuracy was obtained, although over half the errors were identified as being on the edges between woody and non-woody regions that may partly be caused by differences in positioning between the SPOT images and lidar data. The range was from 85.3% in the Hunter to 94.5% in the South East. The second comparison used image-interpreted points of woody vegetation presence or absence. The overall accuracy was 88%, and the range was from 77.5% in Western to 95.8% in the North Coast. Validation of the FPC values is forthcoming.

We owe a debt of gratitude to the numerous Science Division staff and volunteers who edited the maps.

Thanks too, to the following organisations:

The maps may be requested through the SEED environmental portal. Search for woody vegetation.