Find out what National Parks and Wildlife Service, the locals and other groups are doing to provide a safe haven for Manly's little penguins to nest, breed, raise their young and moult. 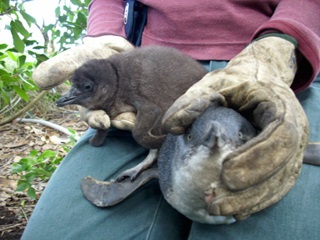 In 2015, 27 penguins were killed by a fox. This had a devastating impact on the population which had been slowly increasing since the 1990s when there were thought to be as few as 30 individuals. Prior to the attack, there were 70 breeding pairs. Last season National Parks and Wildlife recorded 40 breeding pairs. This number has been stable since 2015 however, fledgling numbers are increasing. National Parks and Wildlife works with their volunteer penguin wardens, Taronga Zoo, Manly Council, Manly Environment Centre and the local community during the breeding season to make sure the penguins are given the best chance to successfully breed. 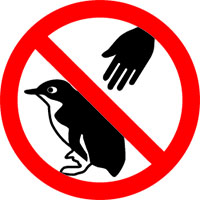 Little penguins are fully protected by law. The NSW Scientific Committee listed the population at Manly as endangered in January 1997.

In December 2002 critical habitat was declared (now known as Area of Outstanding Biodiversity Value). This provides greater protection for the little penguins through stricter controls of activities in areas where they build their nests, raise their young and feed.

During busier times of the year, joint patrols by NPWS and NSW Roads and Maritime officers enforce the critical habitat restrictions and educate boaters and fishers.

Persons found guilty of damage to little penguins, their habitat or critical habitat can incur on-the-spot fines of up to $1500 or, if the matter goes to court, up to $220,000 or 2 years' imprisonment or both. People conducting unapproved development works are also liable for these fines. 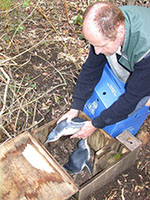 The report Status of the Endangered Population of Little Penguins Eudyptula minor at Manly (PDF 958KB) is a review of five years of monitoring (2002–03 to 2006–07) and the implementation of the Recovery Plan since 2000. 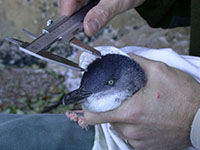 The breeding success of Manly’s little penguins is monitored annually with all accessible, known burrows and nests inspected fortnightly between July and January.

A little penguin expert contracted by National Parks and Wildlife Service monitors the number of:

The 2018-19 breeding season has been relatively poor for the Little penguins at Manly. An unusual disturbance combined with the ongoing effects of a fox attack in 2015 has resulted in the poorest season on record for this endangered population.

In early September, there was an unusual period of disturbance, where adult pairs abandoned breeding attempts, eggs and chicks. This was one of the main factors contributing to the low numbers this year and is suspected to be related to an oceanic phenomenon.

The 2018-19 season resulted in 28 breeding pairs, 63 eggs and 43 fledglings. There was no breeding activity at the Australian Institute for Police Management site. Like previous years, the urban areas of Manly were important for the penguins, with consistent breeding recorded since monitoring began.

These figures are conservative as penguins choose sites which are often difficult to locate. With continued monitoring and appropriate management, it is predicted that there will be a gradual increase in this population over time.

The death of 27 breeding adults at the start of the breeding season from single fox attacks at North Head has resulted in a very poor breeding season. A comprehensive response to the deaths was instigated by National Parks and Wildlife Service (NPWS) to increase protection of the population for the rest of the season.

There was no successful breeding at Collins Beach and Australian Institute of Police Management, and very little sign of activity.  Store Beach success was half that of the previous year.  By the end of the breeding season, reasonable breeding results were achieved at Quarantine Station.

The colony of little penguins is expected to take years to recover. NPWS and partners continue to take action to help re-build the numbers.

The 2014-15 breeding season was good with 67 breeding pairs, 159 eggs laid and 139 fledglings (chicks). Quarantine Station and Stores Beach with the National Park continue to have increased breeding activity in recent years. The urban areas continue to be important breeding habitat for the little penguins.

The 2013–14 breeding season was very successful with 70 breeding pairs, 174 eggs laid and 146 fledglings (chicks). Breeding activity was high across all sites within both the urban areas and Sydney Harbour National Park.

In trying to gauge the success or failure of Manly's little penguin colony, breeding success is a much better measure than the number of breeding pairs. The breeding success at Manly is actually higher than that of the well-known Phillip Island colony. In addition, the Manly penguins regularly 'double-brood' – that is, raise more than one set of chicks per season.

Little penguins at Manly nest in rock crevices and burrows created in both soil and sand. In recent years National Parks and Wildlife Service has supplemented the natural burrows with nest boxes. This has greatly increased the breeding success of little penguins at these sites.

A group of students from Beauty Point Public School recently lent a hand with some home renovations. 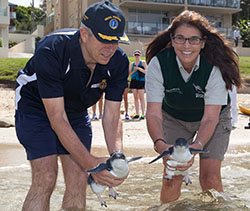 Unfortunately little penguins are still being injured and killed by dogs and foxes. In June 2015, 26 little penguins were killed in North Head, by what is believed to be a single fox – a massive loss in a small population.

Domestic pets are prohibited within the little penguin critical habitat. Dogs must be on a lead in other foreshore areas where penguins are known to occur.

A coordinated fox control program is undertaken at North Head under the NSW Fox Threat Abatement Plan as foxes still pose a risk to little penguins.

Boat strikes also kill and injure penguins, so boat owners are asked to take extra care in and around the Harbour.

Please safely dispose of fishing lines or hooks. Little penguins are also found with pieces of balloons and plastic in their body, so please dispose of all rubbish carefully..

Nursing sick penguins back to health

Staff at Taronga Wildlife Hospital treat injured penguins in the Sydney area and release them back into the wild, with NPWS, where possible.

Since 2005, the NPWS Volunteer Penguin Wardens have been assisting each breeding season by educating the public about little penguins and protecting them and their habitat from disturbance by people and dogs. Find out how you can get involved.

Manly Environment Centre has lots of information and resources on the little penguins at Manly.