Vegetation loss information is created from the analysis and interpretation of annual snapshots of satellite data in the Statewide Landcover and Tree Study (SLATS) program.

The primary objective of SLATS is to map the location and extent of ‘woody vegetation’ loss across New South Wales. A woody plant is defined as one that produces wood as its primary structural tissue. Woody plants are typically trees, shrubs or lianas (i.e. woody vines), and are usually perennial.

SLATS was adopted in New South Wales in 2006 after being initially developed and implemented in Queensland by the Department of Environment and Science. New South Wales has since adapted the method to additional satellite image types and applications.

The SLATS program monitors woody vegetation change using a combination of automated and manual mapping techniques.  It is currently based on imagery from the European Space Agency’s Sentinel-2A and Sentinel-2B satellites that capture high resolution images of the Earth’s surface every five days. A statewide raster layer is produced that indicates where woody vegetation has been cleared each year.

A raster layer is made up of a grid, also known as pixels. In previous years this has been further processed for distribution as a point vector layer.

The satellites that have captured the imagery used in the SLATS program have changed over the years in response to changing technologies.

Summary of imagery and raster outputs 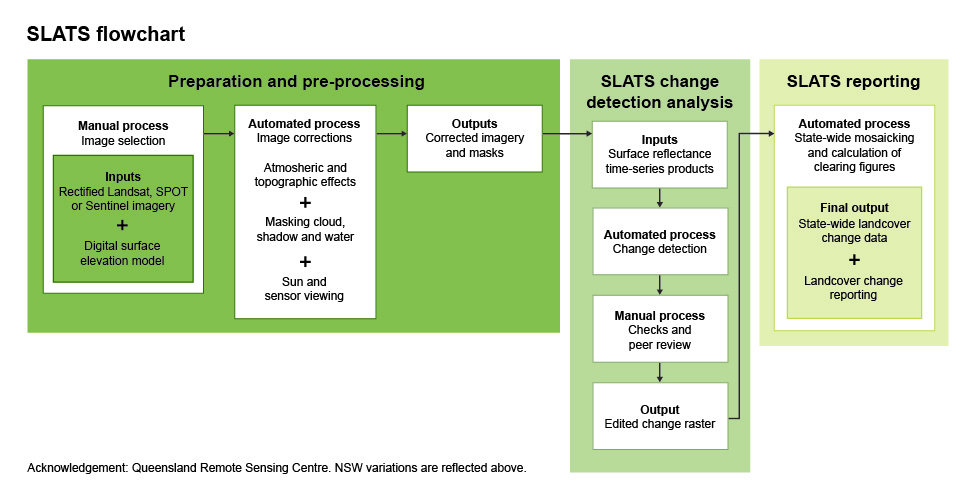 Satellite images are selected as close as possible to 1 January each year and must have a clear view of the ground not impacted by smoke or cloud cover. This requirement can result in a range of imagery dates being selected for each SLATS year, for example the 109 Sentinel-2 images required to cover NSW for 2019 ranged from November 2018 to late January 2019. For this reason, the resulting clearing figures are reported as annualised rates of change for each calendar year (2018-19).

The images are checked for geographic (spatial) accuracy and quality. If needed, the images are georectified or if unsuitable a different image is selected.

Georectification is the digital alignment of a satellite or aerial image with a physical location on the ground. In georectification, a number of corresponding control points, such as street intersections, are marked on the image and and a corresponding ground location is recorded from either an existing map, or GPS position. locations become reference points in the subsequent processing of the image. Visit ESRI for more information.

A variety of masks are created to exclude some areas from the woody change analysis. These include masks for cloud, cloud-shadow, water, hillslopes and shading. The cloud and cloud-shadow masks are generated automatically and then manually edited.

Corresponding pixels in each calibrated ‘before’ and ‘after’ image are compared through an automated process which calculates a probability index of woody clearing. This probability raster for each image shows, for each pixel, the likelihood of the woody vegetation having been cleared. Higher probability is allocated to the most obvious change in woody vegetation.

The probability raster that is created is then edited by image interpretation experts and checked in a peer-review process. Areas that are recognised by an editor as loss are assigned a replacement landcover class which provides an indication of the purpose for which the vegetation was cleared. The assignment of these classes is primarily based on visual interpretation of the context of the identified vegetation change with reference to ancillary data sources. In areas where there are many different forms of land use, it can be difficult to interpret the final replacement class and therefore this classification is indicative only.

The primary landcover classes used are:

The edited probability rasters go through a series of automated checks and are then ‘stitched together’ to form a mosaic of New South Wales to be used for analysis and reporting.

Thanks to the following organisations: