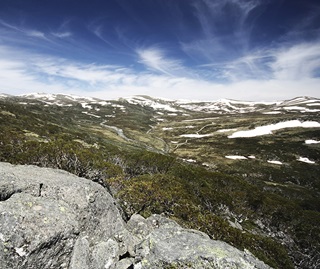 A targeted wild horse control program is underway in Kosciuszko National Park as part of the response to the summer 2019-20 bushfires.

The program is focused on controlling horses in three fire-impacted management areas. These areas cover 9% of the park. All horses are being removed from the Nungar plain area. Horse populations in the Cooleman and Kiandra areas are being reduced towards a sustainable level. The final sustainable population level in these 2 areas will be defined using the outcomes of scientific environmental impact and horse population monitoring. The program is not designed to remove all horses in these 2 areas.

The post-fire control program is based on scientific advice that the impact of wild horses will worsen the effect of the summer bushfires on the park's natural values. These impacts are likely to include:

Removing wild horses and other introduced animals from these fire-affected areas is giving native plants, animals and ecosystems the best chance of recovery. Up to 2000 pigs, deer and goats have already been controlled in three aerial shooting programs in Kosciuszko National Park and surrounding reserves as part of post-fire management this year.

Wild horses are currently being removed using passive trapping. The priority is to rehome as many horses as possible. National Parks and Wildlife Service (NPWS) continues to engage with the RSPCA and the Kosciuszko Wild Horse Scientific Advisory Panel to ensure the highest possible animal welfare outcomes during control operations.

We are committed to finding suitable homes for as many horses as possible, demonstrated by a financial contribution to the first 400 kilometres of transport for rehomed horses while COVID-19 temporary movement restrictions in some states prevent private travel.

NPWS has received a good community response to rehoming and promotion of rehoming opportunities will continue throughout the control program. 92% of the horses removed so far during the post-bushfire control program have been rehomed.

NPWS will only send horses to the knackery if suitable homes are not identified.

Having good, scientifically validated information about the wild horse population is critical to inform sustainable management. The size of the park, and its rugged and remote landscape, means it is not possible to conduct a census that would record every horse. Different techniques are therefore applied at different scales to estimate the size of the population, assess trends over time, and to examine impacts in specific locations. We use this combination of information to inform long-term planning and management decisions.

NPWS continues to consult the panels on the post-bushfire control program.

The Minister has extended the tenure of members of both panels until 1 March 2021. Summaries of all panel meetings are available.

NPWS will prepare a draft long-term wild horse heritage management plan, taking into account advice from the Scientific Advisory Panel and the Community Advisory Panel, before the end of 2020. Public comment will be sought on the draft plan during a public exhibition period.