If you find evidence of brush-tailed rock-wallabies in NSW, please provide as many details as possible on the following form. 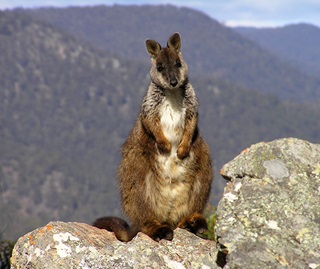 Brush-tailed rock-wallabies occur in NSW, Victoria and Queensland. They were once considered fairly common. However, in recent years they have experienced a dramatic reduction in range and abundance, particularly in Victoria and southern and western NSW. They are currently listed as an endangered species under the NSW Threatened Species Conservation Act 1995.

Foxes are believed to be the most common reason for the brush-tailed rock-wallaby's decline. Foxes were introduced to Australia in the 1870s and have contributed to the decline of a range of native species. Foxes are agile climbers and are well-sized to fit into the crevices where young wallabies shelter while their mothers feed.

However, rock-wallabies face a number of other threats. These include:

Adult brush-tailed rock-wallabies weigh between five and eight kilograms. They are brown with a reddish rump, grey shoulders and a long brush-tipped tail. They have a light cheek stripe and a black stripe that runs from their forehead, between their ears, to the back of their head. They are sometimes confused with the larger, more common swamp wallaby.

Where are they found?

Brush-tailed rock-wallabies live in highly rocky terrain such as escarpments, boulder piles and rocky pinnacles. They generally prefer sites that are north-facing and contain numerous ledges and crevices.

These wallabies can be quite difficult to see in the wild as they are well camouflaged and quite timid by nature. They can sometimes be seen basking in the late afternoon and early morning sun. They are chiefly active at dawn and dusk, moving out of their rocky refuges into more open areas to feed.

The presence of their distinctive scats around highly rocky habitat is often the best sign of their presence. Brush-tailed rock-wallaby scats can be found throughout their rocky habitat, particularly on ledges and boulder piles where they sit to sun themselves.

Their scats can be recognised from other animals' scats by their proximity to rocky habitat and their distinctive size and shape. They are usually a cylindrical shape with a pinch at one end.

What can you do to help?

Tell us about your brush-tailed rock-wallaby sightings

If you see any evidence of brush-tailed rock-wallabies, please fill in an online species sighting form.