The NSW Government's innovative Reintroduction of Locally Extinct Mammals Project is returning at least 13 mammal species currently extinct in New South Wales back into the wild. This project is a significant component of the Government's flagship Saving our Species program. 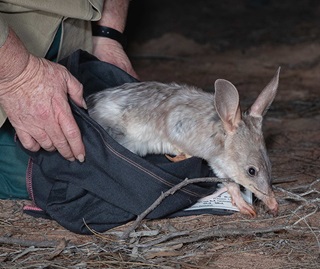 This initiative has seen the return of threatened mammal species, including the greater bilby and bridled nail-tail wallabies, since it was first announced in April 2014. Most of these species have not been seen in their natural habitat in New South Wales for over 90 years.

The reintroduction of 13 locally extinct mammals is part of Saving our Species, which aims to maximise the number of threatened species that can be secured in the wild in New South Wales over the next 100 years.

Nearly 130,000 hectares across 3 national parks reserves are dedicated to the project. Within these areas, the Australian Wildlife Conservancy and University of New South Wales have established and are managing large fenced areas of several thousand hectares where mammals are being reintroduced following the removal of feral cats and foxes. The partner organisations are also delivering complementary park management activities in collaboration with the National Parks and Wildlife Service.

Scientific research has shown these locally extinct mammals play a significant role in maintaining the health of ecosystems. Reintroducing them to exclosures in parks where foxes, feral cats and other pest animals have been removed will not only reduce their risk of extinction but is expected to deliver significant benefits to many other threatened species.

The project is managed using a new model for collaboration between the non-profit and public sectors to deliver conservation outcomes.

The Australian Wildlife Conservancy and the University of New South Wales, operating as Wild Deserts, have been contracted by the NSW Government to reintroduce locally extinct mammals to selected parks. Both organisations have extensive experience in reintroduction programs and large-scale conservation management.

The partners have been contracted following an extensive selection process which began in April 2014. The initial partnership agreements are until at least 2026 and have options for further extension, subject to rigorous ongoing scientific monitoring and evaluation.

Australian Wildlife Conservancy and University of New South Wales are working in close partnership with the National Parks and Wildlife Service to deliver reintroduction activities and associated park management services.

The NSW Government is committing over $40 million over 10 years to this project and will leverage a multimillion-dollar contribution from Australian Wildlife Conservancy and University of New South Wales.

Funding for the project is in addition to other Saving our Species and national parks funding.

Australia has the worst mammal extinction record in the world. Since European settlement, 26 mammal species have become extinct in New South Wales. Of the surviving mammal species, 59% are threatened with extinction.

The Action Plan for Australian Mammals, released in 2014, showed that we are at a critical turning point for many of our smaller mammals. We have lost more mammals in the last 200 years than any other group of species. We must act now to halt this decline.

Which mammals are being reintroduced? expand

The mammals being reintroduced are listed as extinct in New South Wales in the Biodiversity Conservation Act 2016. While they survive in the wild elsewhere in Australia, almost all are listed nationally as threatened with extinction. The following locally extinct species are being reintroduced.

For some reintroduced species, animals may be sourced from wild populations interstate. Another source of reintroduced mammals are from other large fenced areas or special captive breeding populations established in zoos such as Taronga Western Plains Zoo.

Mammals are being released into feral cat and fox-free exclosures of several thousand hectares at 3 different parks. These are:

These parks include large areas of habitat which are suitable for the mammals being reintroduced and which also support a diverse number of other native animals and plants, including threatened species.

National parks have been chosen because we want to look at innovative approaches to improving the health of our park ecosystems. We expect burrowing, digging and other behaviours exhibited by reintroduced mammals will promote healthy vegetation by retaining water and nutrients and helping seed dispersal. Removal of feral cats and foxes will not only benefit reintroduced mammals, but also other species present, particularly ground-dwelling and ground-nesting species.

The sites were chosen because of their suitability for the installation of long lengths of exclosure fencings and because the construction of such fencing was not likely to interfere with existing park uses.

All activities have been subject to a rigorous environmental impact assessment process and each site is implementing a detailed ecological health monitoring program which will inform management at the sites as well as future reintroductions.

When will the mammals be reintroduced? expand

Next step was to eradicate all feral cats and foxes within the exclosures and control other introduced pest species such as rabbits, goats and feral pigs, before reintroduction of locally extinct mammals could begin. Eradication was complete at Sturt National Park in April 2019 but reintroducing mammals was delayed due to drought.

At both Mallee Cliffs and the Pilliga a smaller breeding area has been established inside the main fence. These breeding areas ensure reintroduced mammals sourced from different populations are more likely to encounter each other and inter-breed resulting in a more genetically diverse new population. Following the successful eradication of feral cats and foxes, 2 species have been reintroduced to the Pilliga breeding area (680 hectares); the greater bilby in December 2018 and bridled nail-tail wallaby in September 2019. Greater bilbies were also reintroduced to the Mallee Cliffs breeding area (480 hectares) in October 2019.

During the same period, 4 more reintroductions are planned for Pilliga including the brush-tailed bettong, western quoll, western barred bandicoot and plains mouse.

A rigorous monitoring and evaluation program will help to detect any change in the size of reintroduced populations and the health of animals. Reintroductions will help secure the long-term future of these threatened mammals and restore important natural ecological processes. 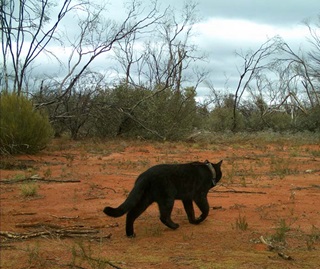 In the absence of cat and fox-proof fences, almost every attempt to reintroduce small mammals has failed. Because of the ongoing threat these introduced predators pose, release into unfenced areas is not currently possible for most species.

The 2013 Australian Senate Committee Report into the Effectiveness of threatened species and ecological communities' protection in Australia recognised the success of predator-proof sanctuaries in helping to protect and recover threatened species.

There are several examples where predator fencing has increased the population of reintroduced mammal species. For example, the Australian Wildlife Conservancy has used a pest animal-proof fence to increase the populations of endangered species such as the numbat, bridled nail-tail wallaby and brush-tailed bettong in the Scotia Wildlife Sanctuary in south-western NSW.

Fencing areas is not seen as a long-term solution for all our threatened species, but one of immediate need to halt further decline and restore identified areas. Each project site is planning for the eventual release of species beyond the fence once cats and foxes can be controlled. These projects will allow us to explore new ways to tackle the ongoing battle with key threats such as foxes and feral cats, as a step towards reversing local extinction of these mammals.

Foxes and feral cats are a major cause of small mammal decline and their removal will benefit other small mammals, reptiles and bird species present at the sites, including the iconic malleefowl at Mallee Cliffs.

The focus on pest animal control may lead to improved strategies and techniques that can be shared with landholders and which will inform conservation strategies for many other threatened species.

The project is monitoring ecological impacts, such as whether vegetation can sustain the population of reintroduced mammals within fenced areas and whether the barrier to movement created by fencing impacts other native animals.

The project represents a large investment in regional NSW. It will create new and unique visitor opportunities for the public to engage with these parks and the threatened species they protect. 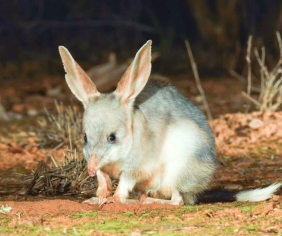 The NSW Government is investing $100 million over five years in saving more threatened animals and plants from extinction. The funds are allocated from 2016 to 2021 to Saving our Species, NSW’s leading threatened species conservation program.