Understanding why fires start and how they burn helps us prepare for and manage bushfires. We conduct ongoing research into fire behaviour and best practice for fire management.

How do fires start?

The 2 leading causes of fire starting in NSW parks are:

All fires need oxygen, heat and fuel to burn. How quickly a fire spreads and how intensely a fire burns depends on the type of fuel, the topography and the weather (mostly wind and temperature).

How do fires burn?

Bushfires often occur in south-eastern Australia, where the weather is usually hot and dry. Fire spreads by a process called heat transfer. This is when the material immediately next to a fire is preheated to the point where it gets hot enough to ignite.

Fire burns more quickly travelling uphill than downhill. The steeper the slope, the faster the fire will spread.

The aspect of the landscape, or the direction it faces, can also affect how fires burn. The aspect influences the type of plants that grow there and the level of moisture it contains. In New South Wales, west-facing slopes are the hottest and driest. The vegetation is more flammable, but the plants are also more fire tolerant. South-facing slopes are usually cooler and wetter with less flammable vegetation. However, these plants are less fire tolerant and fires in these areas can be devastating.

The amount of flammable material in a park is referred to as the fuel load. How much fuel builds up in a given area depends on how much the local vegetation 'sheds' dead fine fuel litter and how quickly it rots.

The overall fuel hazard is measured by assessing the hazard posed by:

Wind and temperature have a major influence on fire behaviour.

Hot temperatures speed up the preheating of fuel and heat transfer, and allow a fire to spread more quickly.

Wind also speeds up the process of heat transfer by pushing flames and heat sideways to preheat unburnt areas. Wind can change the direction of a fire and turn the flank or side of a fire (lower intensity) into a fire front or the head of a fire (highest intensity).

Fire Danger Ratings for NSW are based on predicted conditions such as temperature, humidity, wind and dryness of the landscape. The Fire Danger Rating gives an indication of the consequences of a fire if one were to start. 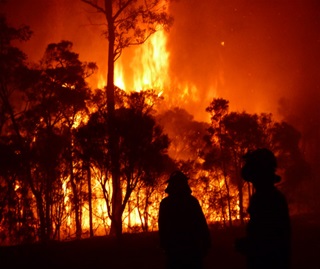 Three types of bushfire occur in NSW parks: ground fires, surface fires and crown fires. One, two or all of these types of fire may make up a fire event.

A ground fire can occur in any conditions and is where peat, coal, tree roots or other materials ignite and burn under the ground. Ground fires can burn through to the surface and become surface fires.

Surface fires are low to high intensity fires that burn on the surface of the ground. The tree canopy may be scorched but does not burn to the extent that it will carry a fire.

A crown fire occurs during fires of extreme intensity. A crown fire is when fire burns and spreads through the crown or canopy of trees. The influence of wind is greater in the tree canopy. When the tree canopy is interconnected or continuous, a fire can spread incredibly quickly.

Responding to bushfires burning in parks

Our strategy for fire management expand

National Parks and Wildlife Service firefighters and staff plan hazard reduction activities. To do this they need to understand fire behaviour in the NSW bush and stay up to date with current policies and procedures. We have developed the Living with Fire in NSW National Parks strategy, which provides a state-wide approach to fire management.

The national strategy is detailed in the National Bushfire Management Policy Statement for Forests and Rangelands, which describes how the sustainable management of fire across the Australian landscape is coordinated.

Fire management practices are responsive to change. We have identified key challenges and future trends in fire management.

Key challenges for fire management include:

Key trends in fire management include:

The following resources help us to manage fire in NSW national parks:

Australia and many other fire-prone parts of the world have experienced an increase in bushfires over the past decade. The bushfires have increased in intensity and caused more damage. There is increasing debate within Australia and overseas about how best to reduce bushfire risk.