The Doodle Comer Swamp Nature Reserve Draft Plan of Management was available for review and comment. 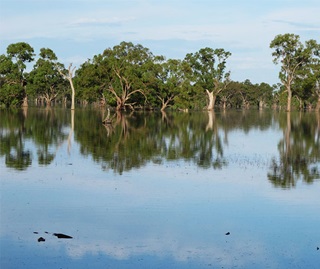 Public exhibition of the draft plan provided an important opportunity for members of the community to have a say in the future management of Doodle Comer Swamp Nature Reserve. Comments closed 28 September 2020.

This plan was prepared using a new format and presented as 2 separate documents:

Doodle Comer Swamp Nature Reserve encompasses about half of the Doodle Comer Swamp, an ephemeral wetland listed in the National Directory of Important Wetlands and the largest wetland of its type in southern NSW. The catchment for Doodle Comer Swamp is unregulated and the wetland has an unaltered water flow regime, now uncommon in New South Wales inland wetlands and of high conservation value.

When inundated, Doodle Comer Swamp attracts large numbers of waterbirds that use the swamp for breeding and foraging. When dry, the wetland provides habitat for the threatened bush stone-curlew, listed as endangered in New South Wales. Other threatened animals found include brolga and superb parrot. The reserve contains several threatened ecological communities such as Inland Grey Box Woodland and Sandhill Pine Woodland.

Doodle Comer Swamp is part of the Country of the Wiradjuri speaking nation and is part of a larger network of swamps and lagoons across the Riverina that formed a significant part of the cultural landscape, sustaining the Wiradjuri with an extensive range of resources for thousands of years. A diverse range of Aboriginal sites exist in the reserve and surrounding area and in 2016 Doodle Comer was declared an Aboriginal place recognising these values and the wetland's special significance to Aboriginal culture.

The National Parks and Wildlife Act sets out the matters that need to be considered when preparing a plan of management. These matters are addressed in the supporting Doodle Comer Swamp Nature Reserve Draft Plan of Management: Planning considerations document.

Why is a plan being prepared now?

Publication of a draft or final plan will replace the statement of management intent for the relevant parks covered.

Once their input has been considered and any further changes made to the plan of management, we provide the plan to the Minister for Energy and Environment. The plan of management is finalised when the Minister formally adopts the plan under the National Parks and Wildlife Act. Once a plan is adopted it is published on the Department website and a public notice is advertised in the NSW Government Gazette.

How can I get more information about the draft plan?

For further information on the plan of management please contact the Park Management Planning Team at npws.parkplanning@environment.nsw.gov.au.

Doodle Comer Swamp Nature Reserve is located on the outskirts of Henty, midway between Albury and Wagga Wagga in southern NSW. The reserve encompasses about half of Doodle Comer Swamp, an ephemeral wetland listed in the National Directory of Important Wetlands.

Doodle Comer Nature Reserve is located in southern NSW, bordering the township of Henty, midway between Wagga Wagga and Albury. The reserve encompasses about half of Doodle Comer Swamp, an ephemeral wetland listed in the National Directory of Important Wetlands.