The NSW National Parks and Wildlife Service and Wollongong City Council are preparing the Illawarra Escarpment Mountain Bike Strategy in response to the need for better management of mountain bike use of the escarpment.

The demands and impacts of mountain biking on both legal and illegal trails on the escarpment are increasing. Many trails provide a good riding experience, but their condition and sustainability vary greatly. The adverse safety, environmental and cultural impacts of illegal use and ad hoc trail development need to be addressed to ensure the activity is sustainable into the future.

The primary emphasis of the draft strategy is providing safe, sustainable recreation for a broad range of riders. The draft strategy identified a potential mountain bike trail network of 82 kilometres on the escarpment.

The draft strategy was on public exhibition from 30 October 2018 to 21 December 2018 and provided the community with the opportunity to have their say on mountain biking on the Illawarra Escarpment.

A total of 956 submissions were received from a broad range of stakeholders, including NSW Government, non-government organisations and private individuals.

The high volume and varied sources of the submissions confirm a high level of interest in the proposal and divided views on best location of trails.

National Parks and Wildlife Service and Wollongong City Council reviewed all submissions. The submissions addressed a wide range of issues that have been summarised under 6 key themes.

Based on the public feedback received on the draft Illawarra Escarpment Mountain Bike Strategy, National Parks and Wildlife Service engaged a contractor to develop a concept plan for the mountain bike network between Mount Keira and Mount Kembla that excludes Mount Keira given its significance to the Aboriginal community.

The network caters for all rider skill levels and a broad range of riding styles. Stacked loops of increasing length and difficulty and highly variable terrain and technical features, such as steep descents, obstacles, bridges and jump lines, are part of the proposed network.

The network also crosses several different land tenures, necessitating the ongoing support of Wollongong City Council and other land management agencies in having mountain bike trails on their land.

The concept plan does not represent the final design of the trail network that is subject to a planning assessment that may refine or change the track locations to reduce the environmental, cultural and social impacts.

National Parks and Wildlife Service (NPWS) has started a comprehensive and detailed environmental assessment to determine the impact of the proposed mountain bike network as outline in the concept plan. Activities within NPWS reserves are assessed under Part 5 of the NSW Environmental Planning and Assessment Act 1979.

The proposed mountain bike trail network between Mount Keira and Mount Kembla outlined in the concept plan will form part of the finalised mountain bike strategy if the planning assessments are supportive. It is expected that other areas identified for mountain bike riding in the draft strategy will also be investigated further to determine if they should be included in the final strategy.

National Parks and Wildlife Service will continue to engage with stakeholders to finalise the mountain bike strategy.

Membership of the group reflects a broad range of business, risk and technical skills to provide advice on the planning assessment and strategy. Aboriginal stakeholders are also represented in this group.

If the planning assessments support the mountain bike network between Mount Keira and Mount Kembla, the next step is the development of a framework (operating framework) setting out how to develop and operate the mountain bike trail network across different land tenures (national parks, local government land and possibly other land). This will include how to best to address public risk, maintain assets, conduct trail maintenance and how the will parties work together.

Answers to your questions expand 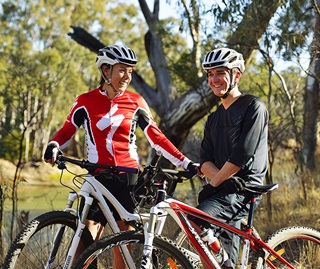 Involving Aboriginal people in the process

A representative of the Illawarra Local Aboriginal Land Council is on the Illawarra Escarpment Mountain Bike Advisory Group. We have engaged the Aboriginal community in the cultural heritage assessment of the proposed mountain bike network between Mount Keira and Mount Kembla.

Will the mountain bike network include Mount Keira?

Mountain biking on Mount Keira is not appropriate given the cultural significance of the mountain to the Aboriginal community. We have identified a network between Mount Keira and Mount Kembla as an alternative option to Mount Keira.

When can we expect works to start to develop a mountain bike trial network?

The planning assessments, the draft Review of Environmental Factors will go out on public exhibition for comment in late 2021. If the proposal is supported, it is expected construction of the mountain bike network between Mount Kiera and Mount Kembla will start in the first half of 2022.

Making sure cyclists stay on the tracks

Responsible social behaviour will be promoted through signage, education and partnering with stakeholders representing mountain bike riders to develop a positive culture of doing the right thing.

What will happen to the existing tracks that are not proposed to be part of the mountain bike strategy?

It is now time to reach out and reconnect with our neighbours, park users, stakeholders, local communities and the wider community to provide updates as the project develops.

To register for project updates please contact us or complete the registration form.

The Illawarra Escarpment Mountain Biking Concept Plan was developed by Synergy Trails, following public exhibition of the Draft Mountain Bike Strategy in 2018. The Concept Plan identifies a total network of 61 trails, delivering a trail volume of 44 kilometres proposed to be developed in the area between Mount Keira and Mount Kembla.

This draft strategy is a Government response to the need for sustainable mountain biking in the Illawarra Region.