National Parks and Wildlife Service is proposing a native title agreement with the Widjabul Wia-bal People.

Notice was given on the proposal to make an agreement for the purposes with section 47C(6)(a) of the Native Title Act 1993 (Commonwealth) in relation to parts of parks and reserves in northern NSW. This notice was to give any interested persons an opportunity to comment on the proposed agreement.

The Attorney General, as State Minister responsible for native title in New South Wales, is proposing, at least 3 months from the date of this notice, to enter into an agreement under section 47C of the Native Title Act 1993 (Commonwealth) (the proposed agreement) with the Widjabal Wia-bal as one part of a comprehensive settlement of their native title determination application which they commenced in the Federal Court of Australia.

Should the Federal Court make a determination of native title which includes an agreement under section 47C with the Attorney General, any historical extinguishment of native title is to be disregarded in the proposed agreement area.

The proposed agreement area will cover parts of the national park estate in northern NSW within the Widjabul Wia-bal claim area, where native title has been historically extinguished, including areas subject to public works:

Effect of the proposed agreement description

Under the proposed agreement, the National Parks and Wildlife Service will continue to operate and manage the national park estate. If made, the determination of native title will not affect public access or any existing valid interests (such as leases or licences) in relation to the proposed agreement area. It will also not affect the continued reservation of the national parks estate or access to, or operation of, public works in the park estate.

Map showing the lots where previous extinguishment may be disregarded. 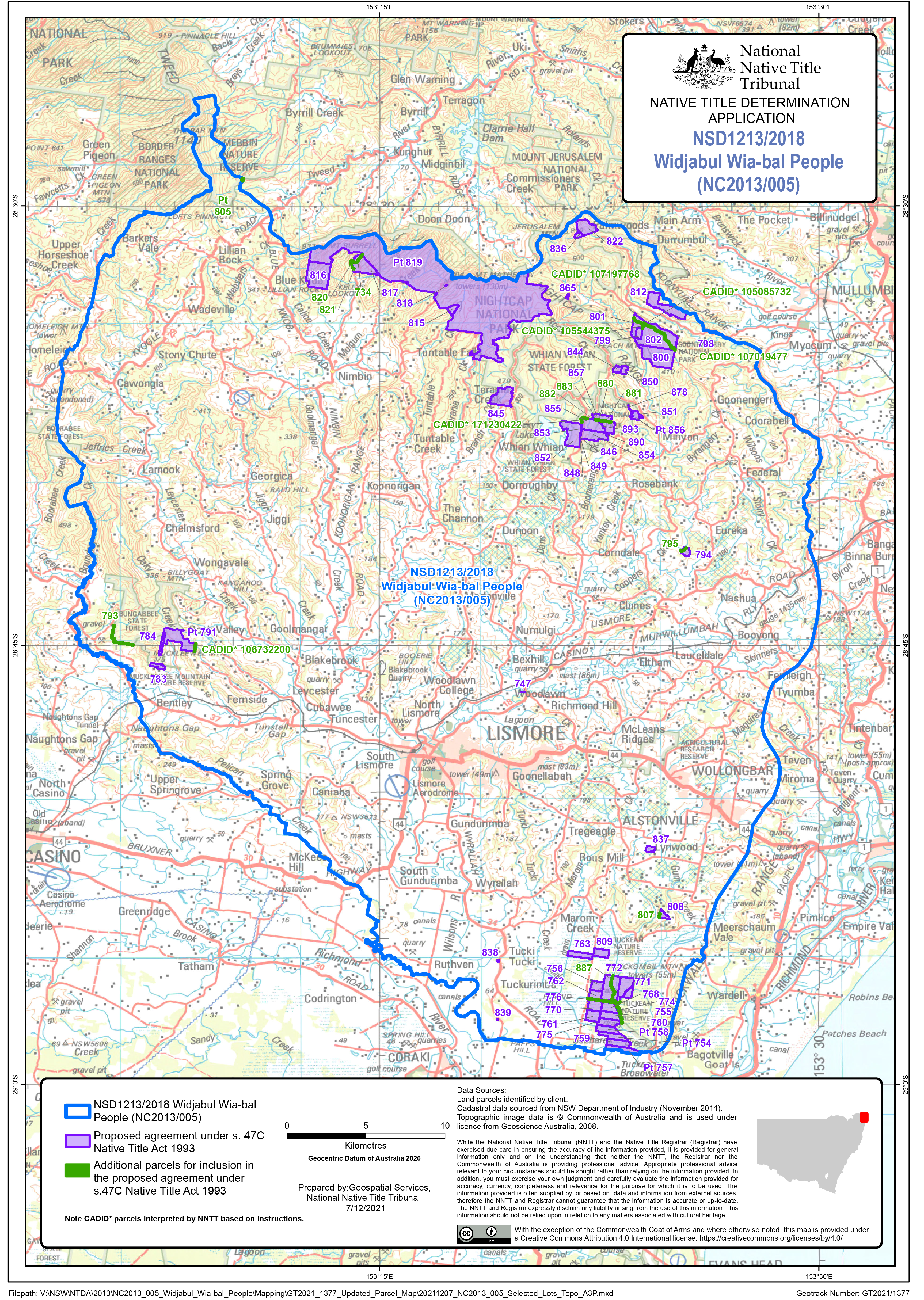 The areas listed in Table 1 and 2 below represent the proposed agreement area and are identified on the map on the website by the relevant ID numbers allocated.

Note: An updated map of the areas in Table 2 will be included on the website to include these additional 18 parcels of land.

Table 1 lists the lot and DP numbers of the proposed agreement area notified on 17 November 2021.

What is a Native Title Act Section 47C notice? expand

What is native title? expand

What happens when native title is determined over a park? expand

National parks include areas where native title is recognised and where it has been extinguished.

There are many parks in New South Wales, where native title rights have been recognised by the Federal Court.

Where native title is recognised, native title rights co-exist with other interests within the park, meaning:

What will happen after the notification period ends? expand

At the end of the public comment period the NSW Government will review all comments received and take them into consideration when deciding whether to enter into the section 47C agreement.