What pollutes our beaches?

Wondering what the water pollution is like at your beach today?

Up until the early 1990s, the main source of pollution at Sydney's beaches was effluent discharged from the North Head, Bondi and Malabar wastewater treatment plants. These plants discharged approximately one billion litres of primary treated sewage to Sydney's coastal waters each day.

Between 1990 and 1992, deep ocean outfalls were built to discharge the sewage three to five kilometres off shore. Since then, the condition of Sydney's ocean beaches has improved dramatically.

Sewerage pollution was also a problem in other regions. To help reduce this, sewage treatment plants were upgraded, with an extended ocean outfall built in the Hunter region in the late 1990s and an increase in capacity of the Cronulla treatment plant in 2001.

Bundeena and Maianbar were connected to the Cronulla treatment plant, replacing the septic system, and a tertiary sewage treatment plant was built in the Illawarra region. Also, the near-shore outfall was replaced with a one kilometre outfall.

Further, in 2002 Sydney Water completed the transfer of Gerringong and Gerroa to the sewage system from septic tanks.

Compared to other countries, the water quality at Australian beaches is generally very good. Information collected by the Beachwatch Program since 1989 shows that Sydney's beaches are now safe for swimming most of the time.

However, there are other causes of water pollution that still need to be managed.

Stormwater is now the major cause of beach water pollution.

In urban areas, natural small creeks and drainage lines have been replaced with networks of canals and pipes. These networks are called the stormwater system. This system prevents flooding in urban areas and transports stormwater to larger creeks which then flow to our harbours and beaches.

When rain falls, pollutants including litter, dog droppings, cigarette butts, leaf litter, oil and silt can enter the stormwater system and may be discharged directly onto the beach.

Unlike sewage, stormwater is not treated. In some cases it is filtered through traps, but it still flows directly from streets and gutters into our rivers, the harbour and the ocean.

Overflows from the sewage system expand

Sydney’s vast (about 22,000 km) underground sewerage network transports wastewater from homes, businesses and industry to Sydney's wastewater treatment plants. Overflows from the sewerage system can occur during long periods of heavy rain when stormwater can enter the sewerage system through illegal connections and damaged pipes causing the pipes to overflow.

Overflows can also occur in dry weather due to blockages in the system caused by tree root intrusion or debris.

To avoid raw sewage backing up into homes when the system is under pressure, overflow points have been installed to divert excess flows into the stormwater system or directly into creeks. Dry weather overflows tend to be smaller in volume but can cause pollution close to the outlet and result in increased health risks. Wet weather overflows tend to be larger in volume due stormwater entering the pipes, and can result in more widespread pollution of ocean and harbour beaches.

During a bypass, wastewater is discharged either without treatment or with only partial treatment. Bypasses can occur in dry weather due to a mechanical or electrical failure at the plant. Wet weather bypasses can occur when the plant is not large enough to handle the large volumes of stormwater in the sewage system. Bypasses can cause beach pollution close to the outlet.

Sydney Water is required to notify OEH of bypasses from its wastewater treatment plants. Bypasses in the Sydney region are reported on Beachwatch daily bulletins and on the Sydney Water website.

In the Illawarra, this information is distributed by media release.

People at the beach expand

People's activities at the beach can also cause localised beach pollution. Although local councils frequently collect litter and debris at popular beaches during summer, it is beyond the resources of most councils to regularly clean up all recreational beaches. 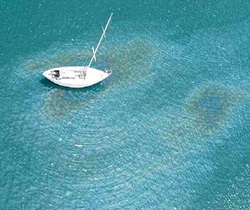 Have you seen water pollution?

Report it to the EPA