Merrilyn is a musician and photographer based at Wentworth on the Darling River. Her work is inspired by the rich, relaxing and contrasting sights and sounds that surround her. Water, in all its forms, is her muse. 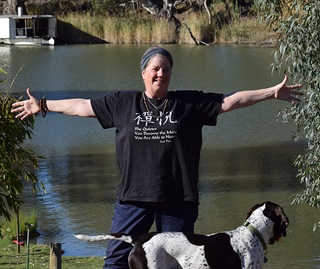 The home I live in is on the banks of the Darling within the town of Wentworth. The front deck of the house looks out on to the river with its myriad of bird life. Next door is a massive river red gum and since we moved here there are now river red gums flourishing at the bottom of the yard. The people of Wentworth have embraced us with open arms and I love the personal relationships that we have built with locals and businesses. People here care about each other and look out for each other. Wentworth brings out the creativity in me with so many fantastic locations to photograph and pristine environmental sounds to record.

As a musician and photographer, I was feeling a lack of sense of community in the suburbs. Many people seemed disconnected from each other and their environment. After living in the same house for over 30 years I decided it was time for a change and initially had the northern rivers region of NSW in mind however, my current home at Wentworth came up in an internet search and I decided to check it out. Part of the appeal was that even though Wentworth is in the bush it is still only 30 mins from a large regional centre and only 4.5 hrs from family in Adelaide. My partner and I made a ‘rush’ trip up to look at the house and it was love at first sight.

How important is water in your everyday life?

My last two CD albums were all about water. ‘Songs of the Darling’ was inspired by the beautifully rich, relaxing soundscapes of the Darling River. ‘Flow’ employed sounds of water from the mountains to the sea, and in between, creating soundscapes around those sounds. Everything about water is important to me. Water - rivers, oceans, lakes, streams, thunderstorms - are my muse, as are the birds and wildlife they sustain.

What is your favourite place to get away from it all?

I have so many favourite places to get away from it all right at my back door. Junction Island, which is the spit of land that sits at the junction of the Darling and Murray rivers, has the most delightful track. It is about a 2km round trip and there is always something new to see. The day I spotted a tawny frogmouth was so special and there are so many other birds too, as I walk along the path. I visit at least once a week.

When I need some quiet I visit the God Tree just out of town at Perry Sand Hills. This behemoth is nestled in amongst the sands dunes and as it is covered by sand up to the crown, you can sit in the tree top without climbing a single branch! It is always so peaceful here and quiet.

My other favourite place is Thegoa Lagoon. I drive through there at least once every couple of weeks. Subject to environmental water flows, this oasis has a track that can be driven around a very large U-shaped lagoon. It is always changing, and I always manage to spot kangaroos, emus and the occasional echidna if I look very closely. Once a year the Darling lilies flower - that is very special.  There are two bird hides there where I love to sit and watch the pelicans and spoonbills although one day, I was attacked when I sat on a nest of Potter’s wasps and received 11 painful stings for my trouble. A year later I still carry scars from a couple of the stings, but I still visit regularly.

Water creates a stillness in me. When I am still I come up with ideas for my music - it is like I can hear the music. The gentle energy of the river creates a harmony in me. The river makes me more aware of my environment too. I have seen the river flood twice now and it always amazes me to think that something so gentle can also be terrifying.

What are some of your happiest memories of time spent by a river?

My happiest memories are of paddling up the river and spying a pair of rainbow bee-eaters going about their business. I don’t see them around here often. I also saw a night heron flying down the river late one afternoon, but I have only seen it once so far.

I love lighting a fire by the river at the bottom of my yard and getting out the guitar for a sing-along with friends. We used to go swimming, but I feel like the water is too full of agricultural chemicals, so the idea is no longer appealing.

...waking up to the orange pink skies over the magnificent river red gums sitting like ancient sentinels over an ancient waterway.

Siwan Lovett is a social scientist and advocate for healthy rivers and wetlands. For Siwan, water is life.