Kim V Goldsmith is a practising artist as well as a marketing and communications consultant. The former ABC Rural reporter grew up on a farm near Coonamble but now calls a 25-acre bush block near Dubbo home. 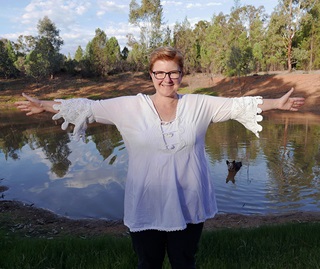 In a deadline-driven world, an afternoon stroll by her dam or river is a kind of meditation for Kim.

It’s a cliché, but water is life. Having grown up on a farm where you bathed in dam water if there wasn’t enough rainwater for showers during a drought or had to let part of your garden die because stock needed the water more than the garden, you know how precious each drop is. When we had the farm, I could see how important the creek was that ran through the middle of our place. It had deep water holes and organically created weirs that kept water on our place for longer after flooding than it would have if it had been cleared. We had feed on our creek flats during the drought when there was nothing left in adjacent paddocks. While we’re five minutes from Dubbo now, we only have rainwater in the house, a grey-water recycling system that waters half the garden and dam water for the rest. The greywater gives us the luxury of having a small area of lush green lawn... and weeds. We’ve never run out of dam water, but our dam is currently very low and used sparingly to water the more established parts of our native garden. I’ve let some parts go while I think about how to establish an even more dry-tolerant garden. I do despair when I see people in town washing cars on their driveways, watering lawns after rain, having long showers and leaving taps running or dripping. They seem completely unaware so many others rely on that finite source of water as well.

I was raised on a large mixed farm 60km north of Coonamble. I went to boarding school for my secondary education and then studied agriculture and journalism, eventually moving to Armidale to work in community radio as a volunteer news director, and at the Agricultural Business Research Institute in exotic breed registrations – namely alpaca, red deer and ostriches. I was working on building up my work experience as I waited for my dream job to come up as an ABC Rural Reporter.

I came to Dubbo in 1992 as the first rural reporter at the newly established ABC Western Plains radio station. In 1996 I left the ABC to start my own marketing communications consultancy and training business with the objective of helping others tell their stories better. I also farmed with my partner for nearly 10 years during the Millennium drought, during which time I also established my arts practice. It was my art that gave me sanity during the drought.

After a long deliberation, we sold our farm in 2007 to be closer to Dubbo, buying 25 acres of non-productive land five minutes from Dubbo but surrounded by native ‘scrub’ – ironbark, pine, wattle and various other understorey shrubs. We have only rainwater and dam water – a big change after having had drinking quality bore water on tap in the house and garden on the farm. Water is more precious now than ever, despite not relying on it for an income, but we’re self-sufficient and have never run short except in the garden. We’re surrounded by birdlife here thanks to the work of the previous owner who planted a huge native garden full of flowering grevilleas, callistemons and eucalypts as well as dense shrubs for nesting habitat, that I’ve added to over the past decade. I’m an avid bird watcher, something I started on the farm. It’s also central to my art practice – as birds are an indicator species for the health of the environment. I photograph and do sound recordings of them to use in my work.

Where is your favourite place to get away from it all?

Home. I love my annual stay-cations when the family heads to the beach – usually in summer when bushfire season is at a peak and someone needs to stay behind to look after things. When our dam is full to over-flowing and the water is settled, it’s beautifully clear. It was like that a couple of summers ago. The native shrubs and trees that were planted around it make it a shady, sheltered place. I often walk the dogs down there for a swim late in the afternoon. Unfortunately, it’s been very low for over 12 months now and the water is green. Not so pleasant.

We do have the Macquarie River nearby - it’s only a five-minute drive to the closest point on the river. I have a few favourite spots on the river where I go to do sound recordings for my digital media artworks – places between Dubbo and Gin Gin near Trangie. It’s a different feeling being on the Macquarie River to being beside a small creek or dam. The birds are different there to what I have at home – they’re louder, as if they need to compete above the sound of the running water.

I tend to only visit the river when I’m gathering recordings for my sound works. The atmospheric sounds of the river environment are great to work with, as is running water.

The weight of my day-to-day responsibilities lifts when I’m outside – whether it’s down the paddock, by the dam, in the garden, or on the river. I have a very hectic, deadline-driven life and my afternoon walks with my dogs and pet goats are a bit like meditation at the end of the day. Of course, after rain when things are fresh and green and there’s water around, you feel refreshed as well. Just breathing fresh air and hearing nothing but the sound of yourself, the animals and birdsong is balm for the soul … that and petrichor!

I prefer still bodies of water to running water. It’s probably because of the sound. I love the sound of running water in my digital artworks, but I don’t find it soothing. I guess I didn’t really grow up with running water around me either. Even the water in bore drains used to flow or trickle gently into a dam. I’m very sensitive to sound and the sounds around bodies of water determines how relaxed I am.

As a kid I was horse mad and spent hours riding all over our property, and along the lanes and stock routes. I used to do the annual pony club camps, and one of the best parts of camp was the ride down into the Castlereagh River at Coonamble. That was the only river I knew as a child – a river that rarely has water in it, as it all flows under the sand. It’s wide and sandy and was great for riding in... unless your horse decided it was also a great place to roll. I managed to jump off before her belly hit the sand.

My grandfather used to love having bush barbecues under shady trees beside deep waterholes on one of the creeks that ran through our property. We’d play hide and seek in the bed of the creek, crawling through the sand, hiding behind islands of grassy tussocks, while mutton chops cooked on a rustic grill over the fire. I’ve probably romanticised that and left out the ant bites and black flies that plagued us, but it is a fond childhood memory.

My grandmother loved walking. She’d walk for kilometres across the paddocks with us as kids. I used to pretend I was a horse and rig myself up with baling twine for her to hold, trotting and prancing beside her. One of my favourite destinations on these walks was the creek about 300 metres from my grandparent’s house. It had a suspended walking bridge over it for when the creek flooded. We used to love playing on it.

Turning off technology is really the only way for me to get away from it all. I already live in an amazing part of the world. I don’t need to travel to be surrounded by nature, I simply need to walk outside.

... hearing birdsong. When I travel to the city or overseas it’s the first thing I notice is missing.

I see amazing things nearly every day just outside my door. Recently, I’ve had the pleasure of watching a juvenile wren ‘suit up’, going from brown with a blue-tinged tail feather, to his striking adult male plumage. Some wonders, no matter how tiny, take time to unfold.

The city is like another world to me. It’s fine for short visits but I find the lifestyle and attitude to the environment in the city completely at odds with what’s important to me.

Senior lecturer in chemistry at Charles Sturt University, based at Wagga Wagga.

City-based author, best known for her novel 'The Dressmaker'. Rosalie grew up on the family farm at Jerilderie, on the Billabong Creek.

Musician and photographer based at Wentworth on the Darling River.