Terry Murphy-Fleming is a farmer and photographer who lives with her family at ‘Boyanga South’ on the Gingham Watercourse, north west of Moree. 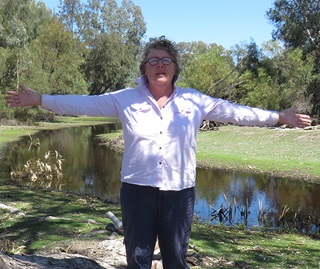 For Terry, water is life - a precious resource and companion to life’s experiences.

One of my fondest memories as a child was running ahead of the flood water as it spread across the land, filling holes and cracks and chasing critters out in front of us. I remember lying in bed at night and listening to the roar of the frogs heralding the arrival of the flood.

I’ve lived at ‘Boyanga South’ for 18 years. It’s on the southern side of the Gingham Channel.  I grew up just over the channel, to the north, on ‘Boyanga’. So, in the end I haven’t gone far!

When it comes to water, it is part of everything we do.

From the moment you rise and use the loo, flush, wash hands and make your morning coffee – water is life. We re-use our grey water in the garden and have multiple tanks on the house and sheds to catch water, in fact the whole house runs on rain water, except for the toilets.  We do all the usual things to save water.

My family moved to ‘Boyanga’, on the northern side of the Gingham Channel when I was nine. We only came from Lagnicourt on the Big Leather side of the Gingham Watercourse, suddenly we had a school bus and no longer needed to board in Mungindi for school.

On leaving school, I studied in Sydney then spent almost a year on Lord Howe Island. I then went to England for three years, spent two years in Sydney and three years in Japan. I was well and truly over the bright lights of the big city when I returned to my home base.

Between Lord Howe and heading for Europe, my parents helped me purchase a property -  ‘Goddard’s Lease’ - which we re-named ‘Moolabulla’. We ran cattle there and, on my return, I took over the water hyacinth management program (a water weed in the Gingham). We also listed 40 hectares as a Ramsar site, a wetland of world significance. In 2017, with my mother’s blessing, we sold ‘Moolabulla’ to the National Parks and Wildlife Service as we saw real value in keeping it protected for future generations.

What brought you here?

I lived for a year on a property next door to my parents, owned by one of my brothers, and worked in Mungindi managing an Ag Spares business and running our own plant nursery in the back. It was while working there that I met my husband. My parents had bought half of the neighbouring property called ‘Baram’, as good high country for stock during floods, renaming their half ‘Boyanga South’.  Phillip and I moved here in 2000, the year we were married, and soon after bought half the property off my parents. We were in the process of buying the other half when my father passed away suddenly in 2006. My father grew up in the Gingham Watercourse and with three sons, he dreamed of leaving a dynasty, I think, but I’m the only one left in the area.

When my husband and I first moved here I worked full-time off farm and starting a family wasn’t smooth sailing, so it really wasn’t until my daughter was born in 2005 that I started to feel the spiritual power of this country. Driving home from work daily I had to cross the Gingham Channel and I always had a sense of dark before light – weird, I know. But those that came before us have left a presence, that’s for sure.

Where do you go to get away from it all?

Out and about on ‘Boyanga South’, either to the sand hollow or lagoon - if there’s water about - or belah forest. With camera in hand I seem more focused on my surroundings, listening to the sounds of the bush, very much back in the here and now. Touch a tree, smile at the sight of a bird, just wandering for hours and hours.

I no longer work off-farm, so I am blessed to be in my ‘happy place’ most days. I often post photos with the caption ‘my office for the day’.

Walking with a camera in hand a smile on my face.

At peace. Calm, energetic and thoughtful...

Water is life. When we first moved here we had a bore near the house and put a bath there, so we could relax in the hot artesian waters. In the winter, the steam would rise up from the bore drain as it snaked past the house. We even saw a pelican swim upstream one day with its mouth open scooping up the little fish which amazed us. The water was piping hot, so how the fish weren’t cooked was baffling let alone the pelican tolerating toasty feet!

These days the bore is capped and piped so we rely on troughs and tanks. While understanding the need for water conservation, I do miss the bore drain!

Watercourse life was different to living on a river.

Floods meant missing school and riding out through flood waters to catch a plane back to boarding school. It meant food drops and climbing onto the roof of the house to try and spot where the food landed, often in the water.

Floods meant running ahead of the water as it spread out across the parched country and squealing with delight when snakes and other critters were sent fleeing from their hidey holes. It was an exciting time and with three older brothers I was always running to catch them up.

My daughter was six years old before she saw her first flood. She too missed school and we caught yabbies at the bridge and rescued echidnas washed up on the banks. Magical times.

...my aunt’s place, ‘Yarramildi’ which was right on the river and had a swinging sheep bridge over the river. We’d go there from boarding school in Mungindi when it rained as we couldn’t get home in the wet. We were there a lot, so my memory is that it rained a lot back then!

...wander with my camera – over to a dam, along a river bank, around a waterhole, up to a water trough. After all, where there’s water, there’s wildlife.

...the sound of a bird or simply no man-made sounds at all.

The funniest thing happened when we were...

...fencing along the channel and Phillip hid in the sags from our daughter and an English backpacker, making rustling noises as if he was a feral pig. She was terrified but laughed so hard when she realised it was just her dad after all. She still tells the story and giggles in the telling.

We do some eco-tourism here now and I took a couple to the Boyanga Waterhole last year. As we negotiated the muddy bank and peered around a large river red gum, the excited whispers went up – a Jabiru (white-necked stork)!

It was a sad time, but I felt better when...

We had to help my mother move into Moree from her beloved home of ‘Boyanga’. She was never truly happy again and losing her suddenly just 18 months later while very, very hard, I know she’s in a happier place.

... the belah forest in the Boyanga South Lagoon Paddock. You leave the arid woodlands and suddenly its dark and cool. Time stands still.

The Department of Planning, Industry and Environment is preparing for the construction of new and upgraded water infrastructure at Homestead and Boera dams.

Significant rainfall at Bourke and surrounds in early March generated localised flows in the Warrego River. This flow, as well as local runoff, entered Boera Dam on Toorale shortly after. The event coincided with a flow in the Darling River.

Local Land Services Officer based in Dubbo. Her career and volunteer work has been largely focused on river restoration, bush care and community education.