Bottlenose dolphins are mammals and can swim up to 260 metres below the surface of the ocean. 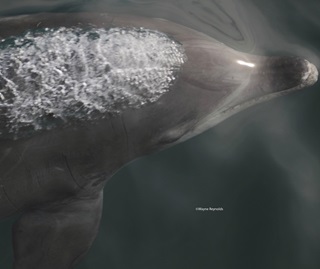 Bottlenose dolphins grow to an average length of 3 to 4.2 metres, and vary in colour, shape and size. They have a short, round snout with a sharp crease between the snout and forehead. Their flippers are long and slender, with pointed tips. Their dorsal fin is usually dark grey, with a prominent curved back. Each dolphin has a different dorsal fin with a unique shape and arrangement of notches and scars by which it can be identified.

The bottlenose dolphin can be found right around the coast of Australia, in temperate and tropical waters. It occupies a diverse range of habitats, including open coasts, sheltered bays and waterways, lagoons, large estuaries and the lower reaches of rivers.

Because bottlenose dolphins occupy a wide range of habitats, they have access to a variety of sea life. However, they primarily feed on small fish, consuming the occasional squid and crab.

Bottlenose dolphins are a very social species, and will often work as a team to maximise their harvest. To hunt larger fish, the bottlenose dolphin will stun the fish by using its tail fluke to throw the fish out of the water and catch the prey in its mouth.

Even though bottlenose dolphins have teeth, they do not chew their food. They will swallow small fish whole, or break up larger fish by shaking them, or rubbing the fish on the ocean floor.

Bottlenose dolphins can live for up to 50 years. They reach sexual maturity at around 10 years of age, and mate all year round.

A female bottlenose dolphin will give birth every 2 to 3 years. After a gestation period of 1 year, she will give birth to her calf tail-first, to ensure it does not drown. She will quickly push the calf to the surface of the water for its first breath. The calf will suckle for about 6 months, and remain with its mother for approximately 4 years. If the calf is female, it will likely stay with the pod it was born into, whereas males will venture out on their own once they are old enough. 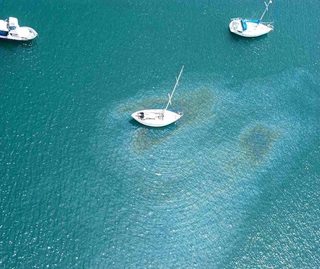 Although bottlenose dolphins are an abundant species, they still experience a number of threats, including: 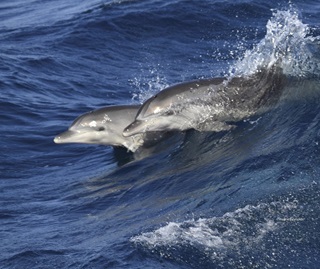 Wild dolphins are unpredictable, very strong and have the potential to injure people.

Occasionally, dolphins can become separated from other group members. This can occur for many natural reasons, and often leaves the isolated dolphin in a vulnerable situation.

You can be dolphin-friendly and reduce the risk of harm to dolphins and people by following these guidelines:

Encouraging dolphins to interact with people could lead to potentially risky behaviours from dolphins. These include:

If you visit Nelson Bay north of Newcastle at any time of the year, you will most likely be treated to a privileged view inside the world of the bottlenose dolphin. This guide introduces the unique dolphins of Port Stephens; where to see them; and what you can do to help care for these beautiful native animals.