With more than 200 species, Australia has one of the most diverse range of frogs in the world. 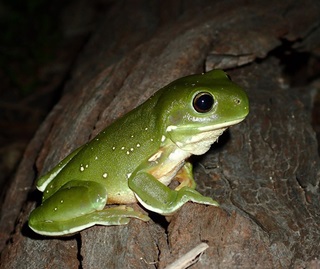 Frogs live in the most varied of our country environments, from rainforests and mountains to deserts. However, they are sensitive to change in their environment.

Most common frogs live in or around fresh water. Many need water to breed, although a small puddle can be enough. Their thin, permeable skin is not waterproof, which means they can lose a lot of body moisture on warm days. For this reason, frogs are most active at night, when they will hop about in search of food or a mate. During the day, they find a hiding spot and wait until the heat and light of the sun have passed.

Frogs and the environment

The thin, porous skin of frogs and tadpoles makes them sensitive creatures. Through this skin, they absorb chemicals from the air and water. For this reason, frogs are good indicators of environmental damage.

If you hear many frogs in an area, it means that the local environment is likely to be unspoiled. However, in areas where water or air pollution have occurred, the local frog community will be affected and there are likely to be very few frogs. On some mining and industrial sites, surveys of frogs in the local area have been used to detect accidental pollution of waterways.

Most people only realise that frogs are about when they hear them calling near a pond or stream. Each species makes its own particular sound, but the male frog does all the calling, to attract the females.

Listen to the calls of 32 frogs

For more information about these frogs read Frogs of south-west NSW.

If the female frog is also ready to breed, she will approach the male frog. He will climb onto her back (this embrace is called amplexus) and she will carry him to the egg-laying site. As she releases her eggs, the male frog releases sperm over the eggs. Fertilisation occurs outside of the female's body, usually in pond water.

The fertilised eggs develop and hatch to produce tiny tadpoles, which grow and develop into frogs over a period of months. This change from tadpole to frog is called metamorphosis. The process involves not only the loss of the tail and the growth of legs and arms, but also the replacement of the tadpole's internal gills with lungs. Its digestive system also changes, to cope with a diet of insects rather than algae and decaying animal matter. The aquatic tadpole metamorphoses into a land-dwelling frog.

Create your own frog habitat

The FATS Group has published useful factsheets to help you create and restore frog habitat - you can order them from the FATS website.

This guide aims to assist in the identification of frog species commonly found on the highlands, tablelands, slopes, and plains of south-west New South Wales, contributing to a broader appreciation and knowledge of these interesting and important animals.

How much water does a frog need?

This education resource has been developed to provide an opportunity for students to learn about the southern bell frog (Litoria raniformis), a threatened Australian species.