Some native frogs bred in captivity can be kept as pets in New South Wales, as long as you have a licence. 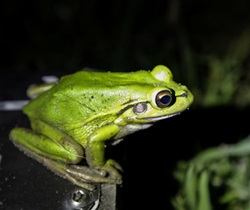 Native frogs and amphibians are protected by law so if you want to keep one as a pet you’ll need a biodiversity conservation licence granted under the Biodiversity Conservation Act 2016 from the Department of Planning, Industry and Environment (National Parks and Wildlife Service).

The only non-native (exotic) amphibian that can be kept as a pet without a licence is the axolotl, Ambystoma mexicanum. All other non-native frogs and amphibians cannot be kept as pets because they may become invasive and spread disease.

It’s against the law (Biodiversity Conservation Act 2016) to take frogs or tadpoles from the wild or release unwanted ones.

Taking animals from the wild, or even your backyard, can cause local extinctions. Dumped frogs can spread disease and starve to death or be killed by other animals.

Pet native frogs must be bought from licensed animal keepers.

NSW schools have been licensed to allow students and teachers to collect and keep up to 20 tadpoles.

Tadpoles must not be collected from national parks or other reserves.

When tadpoles have turned into froglets they must be released at the place where they were collected. The Department of Education has advice about collecting frogs and handling them in the classroom.

Get the right licence

Native frog species that can be kept as pets are classed as Companion, A1 and/or A2. Each class requires a different type of biodiversity conservation licence. The right type of licence for you will depend on how many frogs you want to keep and what type of frog you want.

For one animal expand

Which frogs can be kept

For more than one animal expand

With this licence you can keep more than one frog bred in captivity as a pet. You can also add another class of animal if you want to keep a bird or other kind of native animal as a pet.

After 2 years of keeping frogs you may be able to upgrade to an advanced licence (for species that are less common or harder to look after).

Which frogs can be kept

To upgrade your licence to a more advanced licence you must:

There are 29 native frogs classed as A2 animals. These frogs are rare or more difficult to keep than the more common Companion or A1 class frogs. They are not traded by pet shops and can only be obtained from specialist frog breeders.