The expertise and experience of community members and regional agency staff comes together in the management of water for the environment. 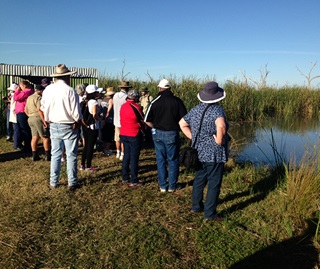 The Gwydir Environmental Water Advisory Group (EWAG) includes representatives from a diverse range of backgrounds who all have an interest in helping government in the decision-making of water for the environment. These include the local Aboriginal community, people with a keen interest in fish and the local river systems, scientists, environmentalists, the local farming sectors and staff from relevant government departments.

The Gwydir EWAG is independently chaired by Ken Flower, a former general manager of the North West Local Land Service, who strongly believes in the facilitation of community involvement in decisions on water for the environment allocations and use.

‘The committee presents a real opportunity to combine the input and expertise of community and various government departments and agencies,’ he said.

‘The key challenge and opportunity is to allow the community to see the benefits of water for the environment first hand,’ he said.

Senior wetlands conservation officer Daryl Albertson has seen the role of the advisory group expand since its inception in 2002.

‘In its early stages, the Gwydir EWAG provided advice to government on the use of water from a single environmental water entitlement - the environmental contingency allowance,’ Mr Albertson said.

‘Efforts were largely focused on supporting colonial waterbird breeding when it occurred in the Gwydir Wetlands.

‘In more recent times, committee membership has broadened in line with an increase in the portfolio of water for the environment and scope for its use across the Gwydir catchment.

‘The suite of watering sites now consists of assets in the other watercourses, native fish in the Gwydir River and connected river systems, as well as deliveries into the Gwydir wetlands for a variety of outcomes, including waterbirds.’

The activities of the EWAG include:

Water managed by the EWAG is sourced from:

The Gwydir Water Sharing Plan sets aside an environmental contingency allowance of up to 45,000 megalitres in Copeton Dam, accruing at the same rate as the general security entitlement.