Hill End Historic Site conserves an important part of the history of 19th century gold-mining in New South Wales through a rich and authentic collection of standing heritage buildings and moveable heritage. 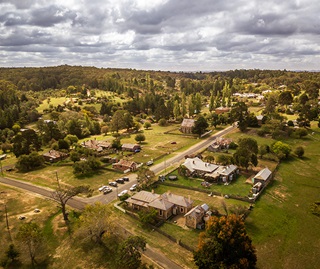 Hill End Historic Site is located in the Central Tablelands of New South Wales, approximately 75 kilometres from the regional cities of Bathurst and Mudgee, and 38 kilometres from Sofala, another former goldmining town. The site is part of a living village conserving state-listed heritage from the 1850s gold rush era and a post-World War II artists’ colony. As well as the core of Hill End village, the site includes several dispersed former goldmining sites: Tambaroora, Golden Gully, Valentines Mine and the Quartz Roasting Pits.

Hill End Historic Site conserves and invigorates a living village as a unique example of a 19th century mining settlement of the gold rush era and post-World War II artists’ colony. Growth and development of new activities are encouraged to reinforce community, heritage, the economy and cultural tourism within conservation limits. A whole-of-landscape approach is applied in managing the authenticity and integrity of Hill End village, so that its natural, cultural and social heritage values are appropriately conserved, interpreted and enhanced.