Two species of native mammal can be kept as pets in NSW as long as they have been bred in captivity and you have a licence. 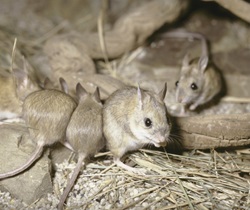 All native mammals, including marsupials like kangaroos, possums and quolls, are protected by law in NSW.

You can keep only two species of native mammal as pets: spinifex hopping-mouse and plains rat. You will need a biodiversity conservation licence granted under the Biodiversity Conservation Act 2016 from the Department of Planning, Industry and Environment (National Parks and Wildlife Service).

The Department often receives enquires about keeping dingoes as pets. Wild dingoes are protected within lands managed by the National Parks and Wildlife Service (for example, national parks). However, under the Companion Animal Act 1998, dingoes and dingo hybrids bred in captivity can be kept legally as pets in NSW. There are restrictions in some areas.

If you want to keep a dingo as a pet contact your local government authority. The Office of Local Government provides information for dingo owners.

It’s against the law (Biodiversity Conservation Act 2016) to take native mammals from the wild or release them to the wild.

Taking animals from the wild, or even your backyard, can cause local extinctions. Illegal killing and trapping has contributed to the decline of many native Australian mammal species. Released mammals can also spread disease or may suffer from starvation or predation.

The type of biodiversity conservation licence you need to keep native mammals as pets is the Native Animal Keeper Licence. The two mammal species that can be kept under this licence are classed as M1 animals.

With this licence you can keep one or more spinifex hopping-mouse or plains rat that has been bred in captivity as a pet. You can also add another class of animal if you want to keep a frog, bird or other kind of native animal as a pet.

Spinifex hopping-mice and plains rats have basic keeping requirements and are readily available in captivity from licensed animal keepers.

Which animals can be kept