Learn why a variety of organisms in the soil is important, how it creates healthy ecosystems and the State’s plans to maintain biodiversity. 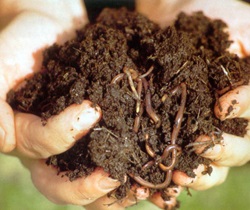 Soil biodiversity is the variety of life that exists within the soil, including bacteria, fungi, earthworms and termites. A teaspoon of topsoil typically contains a vast range of different species and up to 6 billion microorganisms.

The maintenance of soil biodiversity is essential to both the environment and to agricultural industries.

The diversity of organisms living within soils is critical to all earth ecosystems because soil organisms:

Soil biodiversity is recognised as a critical influence on agriculture as it can enhance sustainability through improved:

The Food and Agriculture Organization of the United States (FAO) estimates the socio-economic value of soil biodiversity exceeds US$1542 billion.

Soils are a vital component of ecosystems because:

Examples of ecosystems and plant communities formed by a unique combination of soil and climate include:

Grazing systems which encourage plant diversity usually have higher soil biodiversity, due to the greater availability of food resources from roots and litter, which support a greater variety of organisms in the soil.

The application of organic matter to the soil, such as crop stubble, supports greater populations of surface feeding creatures including earthworms.

Management techniques such as crop rotation and reduced tillage increase the quantity and quality of organic matter available to soil organisms and develop a more stable environment that encourages more soil biodiversity.

The Draft New South Wales Biodiversity Strategy 2010–15 identified key themes that contributed to building ecosystems that are both healthy and resilient.

Primary produces need to sustainably manage productive landscapes for a range of commercial and biodiversity outcomes. The draft strategy supported primary producers to include biodiversity goals in the sustainable management of their natural resources.

There is now greater focus on agricultural production systems which encourage and enhance all aspects of native and commercial biodiversity. There are several practices that suit the local environment and increase landscape health by keeping native species that an important role in that landscape. These include:

Management of land within capability

The NSW Soils Framework: Looking forward, acting now detailed existing policies and programs for soil management in New South Wales and how they are used in the approaches taken by catchment and government administration. The framework suggested new directions in NSW soil management in the areas of institutional arrangements, research and development, marketing and awareness, information exchange and capacity building, funding and incentives, policy tools, regulations and natural resources management legislation in general. A draft NSW Soils Policy based on the framework is being developed.

Public land management agencies, Local Land Services and community groups should continue to promote the management of land according to its capability including the use of sustainable soil management practices.

Stay up to date on the latest news and events about landscapes, soils and systems in New South Wales.