Outcomes from water for the environment in the Border Rivers catchment, 2018–19.

The 2018–19 water year was hot and dry with limited rainfall and low natural flows.

Local water planning adopted a flexible and responsive approach. This approach acknowledged natural cues and the need to meet the water needs of the environment across a range of systems and climatic conditions. 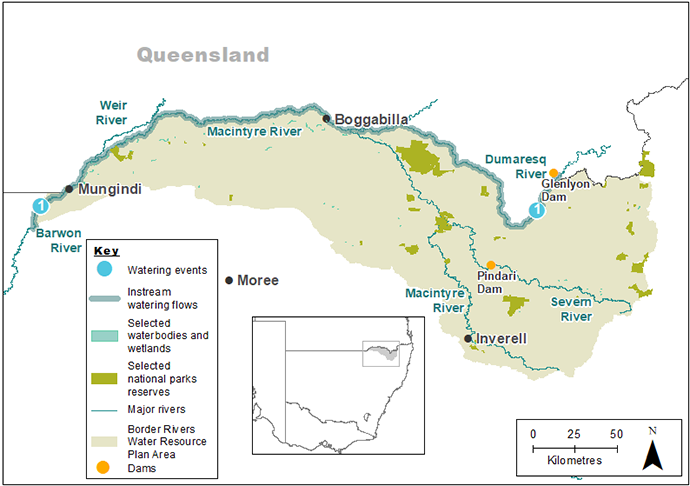 The New South Wales Border Rivers catchment began the 2018–19 year with access to healthy reserves of water for the environment from the last wet period in 2016.

In previous years the Commonwealth Environmental Water Holder chose to hold their water in reserve for future use.

In April–May 2018, water for the environment was used to connect the Macintyre and Barwon rivers aiming to join with a release of water from the Mehi River downstream of Collarenebri.

The combined delivery of water was intended to:

With forecasts of a prolonged dry period, the Department of Planning, Industry and Environment – Environment, Energy and Science’s (DPIE–EES’s) Water for the Environment Team worked with the Commonwealth Environmental Water Holder (CEWH) to deliver water into the Barwon River from Glenlyon and Copeton dams. Advice was sought from the Gwydir Environmental Water Advisory Group for the contribution from Copeton Dam. The resulting delivery of 7.4 gigalitres of Commonwealth water is known as the Northern Fish Flow.

This table provides a summary of water for the environment delivered in the New South Wales Border Rivers catchment during the 2018–19 watering year. Volumes are indicative only.

The Commonwealth Environmental Water Holder in partnership with the Department of Planning, Industry and Environment – Environment, Energy and Science, and the Gwydir Environmental Water Advisory Group, delivered the Northern Fish Flow, through the Border Rivers catchment (Dumaresq and Macintyre rivers) into the Barwon River with the addition of flows from the Gwydir catchment. This event delivered important outcomes for river health and populations of aquatic organisms including native fish and turtles.

In response to the dry season, climatic outlook and the state of river pools, water held in reserve was used to target habitat health and provide connectivity to benefit native fish. The event was timed to maximise the reach and impact of water for the environment.

A total of 7.4 gigalitres of water was released from Glenlyon Dam (Queensland), with a further 28.6 gigalitres from Copeton Dam. The release from Glenlyon Dam was expected to reach the junction of the Barwon and Mehi rivers near Collarenabri, but due to high evaporation and soil seepage it did not reach its target. However, the release from Glenlyon travelled more than 500 kilometres, ceasing about 20 kilometres upstream of Collarenabri. The release from Copeton Dam made the expected connection to the Barwon River, flowing on to refill and reconnect pools as far downstream as Brewarrina weir.

In the Border Rivers region, the NSW Government worked with the Commonwealth Environmental Water Holder and Queensland Government to deliver the Northern Fish Flow, which began in April 2019.

The flow aimed to support native fish in the northern basin by:

Water release from the Glenlyon Dam on Pike Creek in the Queensland Border Rivers region flowed across the border into the NSW Border Rivers catchment. This flow inundated a 500-kilometre stretch of the system including stretches of the Dumaresq, Macintyre and Barwon rivers.

At the same time, water was released from Copeton Dam, destined for the Barwon River via the Mehi system.

It was hoped the two flows would meet, however, the Border Rivers flow stopped just short of its junction with the Mehi River.

Although the two flows did not meet, the event topped up waterholes along the length of its passage, supporting aquatic vegetation which provides habitat for native fish.

Monitoring work suggests that a healthy population of Murray cod lives in the Border Rivers, which will help replenish other populations when wetter conditions return to the system.

Community information events were held in 10 locations co-ordinated by the Commonwealth Environmental Water Holder in collaboration with DPIE–EES, including attendance by Murray–Darling Basin Authority and Natural Resources Access Regulator. Communities welcomed the water after such a long dry period, with many people observed fishing. Along the way this flow provided a ‘top-up’ to weirs providing town water supply.