Outcomes from water for the environment in the Gwydir catchment, 2018–19.

The Gwydir River system and its wetlands are located on a semi-arid floodplain, in a relatively low rainfall zone. This influences decision-making around water for the environment.

Since the summer of 2016, the Gwydir catchment has experienced an extended dry period. The 2018–19 water year was hot and dry with limited rainfall and low natural flows. Water for the environment was used to support rivers and wetlands through this dry phase.

A conservative planning approach taken over preceding seasons meant that reasonable reserves of water for the environment were available at the beginning of the 2018–19 water year. 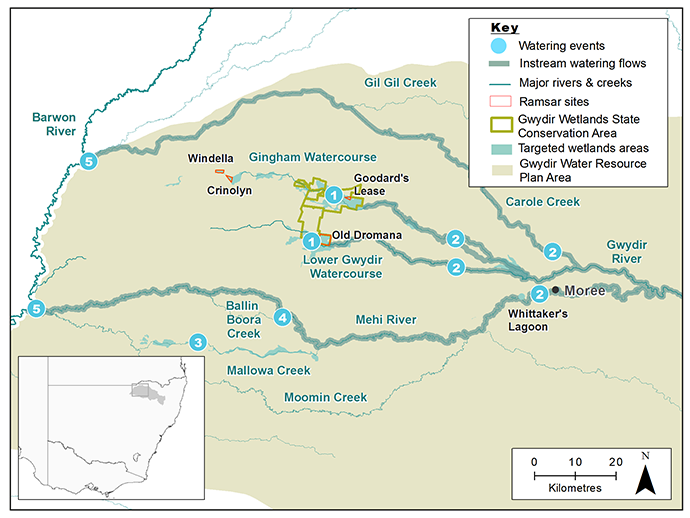 In the 2018–19 year,rainfall and natural river flows were low; however reserves of water for the environment were available to preserve targeted water-reliant ecological communities and support them through this dry phase.

The Department of Planning, Industry and Environment – Environment, Energy and Science’s (DPIE–EES) Water for the Environment Team worked with the Commonwealth Environmental Water Holder to manage 114.2 gigalitres of water flows to:

Annual planning of water for the environment takes a flexible and responsive approach. This approach responds to natural cues and ecological water needs across the range of systems and climatic conditions. Annual planning has a rolling 3-year planning cycle and considerations include carrying over sufficient volumes to support water-dependent communities in the longer term.

This table provides a summary of environmental water delivered in the Gwydir catchment during the 2018–19 watering year. Volumes are indicative only.

During the 2018–19 water year, water for the environment was released into the Gwydir Wetlands systems and Mallowa Creek watercourse. Water was also used to protect priority river reaches in the Carole Creek, Mehi and Gwydir rivers from complete drying. A small watering trial was conducted in Ballin Bora Creek, an anabranch of the Mehi River.

A total of 60 gigalitres of water was delivered to the wetlands of the Lower Gwydir and Gingham watercourses. This watering aimed to preserve wetland condition in preparation for the forecast dry conditions. Almost 4000 hectares were inundated in the Gingham section and just over 3000 hectares in the Lower Gwydir section.

Surveys conducted in these areas reported:

Four deliveries of water for the environment targeted pools in river reaches that had ceased to flow. Releases in:

The intent of these releases was to maintain water quality and water levels in pools. This would enable fish to move between pools and reduce the risk of fish kills from the drying river. No fish kills were reported in the Gwydir in 2018–19.

Water delivery to the Mallowa Creek inundated about 2000 hectares of wetland and floodplain, enabling reconnection with the Moomin Creek.

A trial watering of the Ballin Bora Creek via upstream private irrigation infrastructure was conducted from December 2018 to January 2019. Stock and domestic water was previously delivered this way, but this was the first-time managers of water for the environment worked with the landholder to deliver flows to the system to improve habitat in the stream. Water was delivered in two flows:

A flow was also delivered into the Mehi River to connect the Gwydir system with the Barwon River. More detail on this release is provided in the case study. 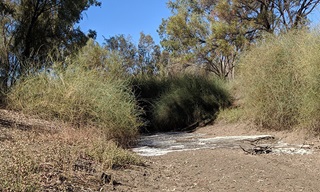 Water releases achieved significant outcomes for the Gwydir catchment and downstream communities in 2018–19.

Survival of native fish was one of the main objectives of the Northern Fish Flow event. The flow refilled and reconnected refuge pools along the Mehi and Barwon rivers.

At the same time, 7.4 gigalitres of CEWH water was released from Glenlyon Dam (just north of the Queensland border), with the aim of meeting the Gwydir/Mehi (Copeton Dam) release as it flowed into the Barwon River.

In the Gwydir catchment, the event: