This fact sheet provides information on koala populations that live within this cleared and fragmented region and how habitat restoration can help support these isolated populations.

The distribution of koalas in this area is poorly understood. They are found in a range of habitat types including small woodland and forest remnants, paddock trees within fertile agricultural areas, and more rugged woodlands and forests. 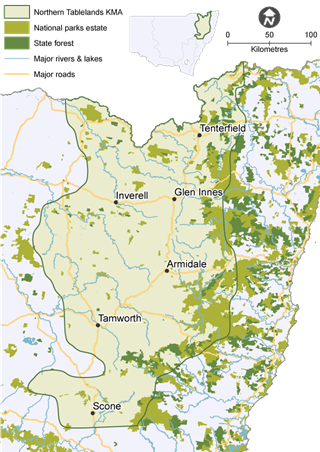 Koalas and koala habitat in KMA 4 are threatened by:

Plant spacing can vary depending on the vegetation community you aim to establish (e.g. woodland, open forest or tall open forest). Trees should be planted far enough apart to have good tree form or lateral branches and to allow enough light through for native grasses, shrubs and ferns to thrive.

These tree lists contain recommended tree species for koala habitat within KMA 4. The lists align with local government areas located within this KMA: