This fact sheet describes koala populations in this region and how to regenerate the variety of habitats they use. 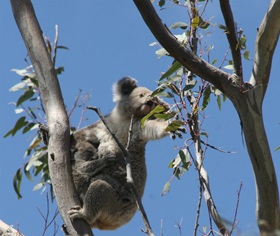 There are many koala populations in the Central Coast Koala Management Area (KMA 2), which extends from Newcastle in the north to Wollongong/Shellharbour in the south

This KMA has extremely varied habitat types, from coastal lowlands to the Blue Mountains hinterland and the Southern Highlands. It includes a high diversity of koala feed tree species.

Koalas in this KMA often prefer moist valleys and gullies, but they also move along cliff edges, and use drier ridges, slopes, and rock caves on hot days. 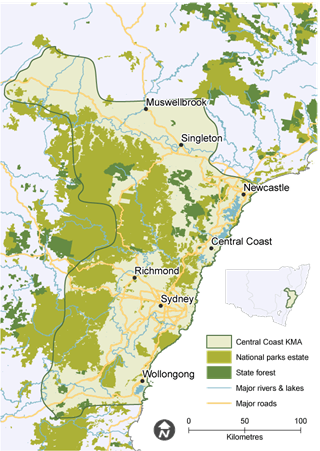 Koalas and koala habitat in KMA 2 are threatened by:

Plant spacing can vary depending on the vegetation community you aim to establish (e.g. open woodland, open forest). Trees should be planted far enough apart to have good tree form or lateral branches and to allow enough light through for native grasses, shrubs and ferns to thrive.

We recommend you plant a range of high-, significant- and occasional-use tree species from the Recommended tree species list.

These tree lists contain recommended tree species for koala habitat within KMA 2. The lists align with local government areas located within this KMA: