This fact sheet gives an overview of koala populations in this region and how restoring habitat and habitat connectivity can support them. 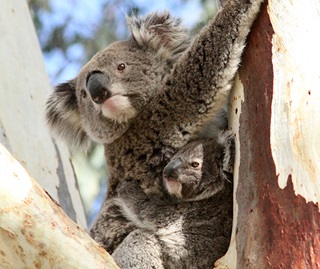 The Western Slopes and Plains Koala Management Area (KMA 6) extends across central New South Wales, between the Queensland and Victorian borders, from Parkes in the east to the Cobar and Bourke districts in the west.

Large koala populations once lived in this KMA, in particular the Pilliga region and around Gunnedah, Walgett and Moree. Recent surveys have found no evidence of koalas in the Pilliga, and the Gunnedah population appears to fluctuate in size over time periods of decades. A small koala population was established in Narrandera in 1972 through translocation of Victorian animals.

Koalas are found in large low-fertility woodland blocks, small remnant patches and paddock trees in agricultural and urban settings. Relatively high densities of koalas are found on flat lands with fertile black clay soils, such as the Liverpool plains, and riparian areas with river red gums, although these areas are less well studied. 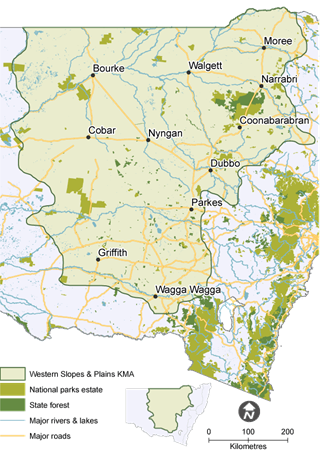 Koalas and koala habitat in KMA 6 are threatened by:

Plant spacing can vary depending on the vegetation community you aim to establish (e.g. woodland, open forest). Trees should be planted far enough apart to have good tree form or lateral branches and to allow enough light through for native grasses, shrubs and ferns to thrive.

These tree lists contain recommended tree species for koala habitat within KMA 6. The lists align with local government areas located within this KMA: