This fact sheet describes the koala populations scattered across this region in sparse patches and how the cleared and fragmented habitat poses a major threat to these animals. 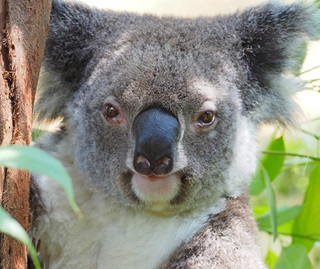 The Central and Southern Tablelands Koala Management Area (Central and Southern Tablelands KMA or KMA 5) lies in the central west and south west of New South Wales. Located between the Sydney metro area and the central western slopes and plains, the region extends from the Mudgee and Bathurst districts west of Sydney, south through Goulburn and Yass to the foothills of the Victorian alps.

Sparse and patchy koala populations live at high elevations, mostly to the east and north-east of Cooma and in the Bathurst–Cowra–Mudgee–Lithgow area. Other records of koalas scattered throughout this region include sightings around Goulburn, in Bungonia State Recreation Area and the Mundoonen Nature Reserve.

Koalas are mostly found in rugged, infertile woodlands and forests in this area, probably a consequence of land clearing and agricultural development in the fertile flats. Koalas in some areas chew the bark of Eucalyptus mannifera trees to access sodium in an otherwise sodium-poor environment. 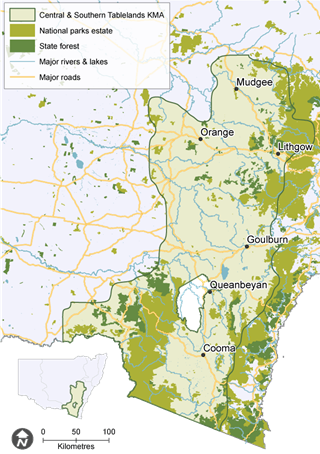 Koalas and koala habitat in KMA 5 are threatened by:

Plant spacing can vary depending on the vegetation community you aim to establish (e.g. woodland, open forest or tall open forest). Trees should be planted far enough apart to have good tree form or lateral branches and to allow enough light through for native grasses, shrubs and ferns to thrive.

These tree lists contain recommended tree species for koala habitat within KMA 5. The lists align with local government areas located within this KMA: