Outcomes from the use of water for the environment in the Murrumbidgee catchment for 2019–20.

Covering an area of 81,527 square kilometres, the Murrumbidgee catchment includes 26 storage or diversion structures, along with a 1690-kilometre stretch of the river, and surrounding wetlands.

The Murrumbidgee catchment saw very dry conditions and significantly lower than average inflows in 2019–20. This resulted in only an 11% general security allocation (the average carryover was 8%) with about 30 gigalitres of New South Wales environmental water allowances available for use.

The focus of water managers in 2019–20, with an expected very dry to dry resource availability scenario as identified in the Murrumbidgee Catchment Annual Environmental Watering Priorities 2019–20, was aimed at restoring a more normal flow pattern to support a robust food web and other system functions. These dry conditions continued until early 2020 when wetter than expected conditions occurred.

To build on low starting allocations, water was carried over from the 2018–19 water year. Under these conditions, the Department of Planning, Industry and Environment environmental water managers worked with the Commonwealth Environmental Water Holder (CEWH) to water the Gayini (Nimmie-Caira) wetlands, located in the Lowbidgee region. This private property event inundated thousands of hectares of lignum wetlands and creeks, which in wetter times provide important nesting habitat for colonial waterbirds such as spoonbills and ibis.

Remaining water for the environment was used to maintain refuge habitats for native fish, frogs and turtles as well as habitat important to waterbird species such as Australasian bitterns and brolgas. Significant outcomes included: 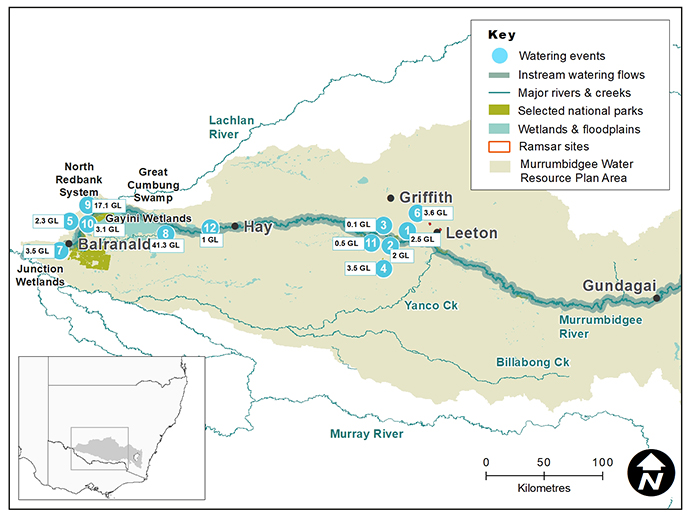 After a successful large-scale watering of Yanga National Park in 2018–19, plans were put in place to use water for the environment primarily in the Gayini and North Redbank systems of the Lowbidgee Floodplain.

Water for the environment was also set aside specifically to manage higher flows for native fish habitat requirements, should a repeat of the record heat wave conditions and low flows eventuate during the summer of 2019–20.

The Murrumbidgee Environmental Water Advisory Group considered the condition of river and wetland assets, water availability and weather forecasts and recommended flows to support a range of ecological outcomes. The main aims of the flows were to:

The watering aims identified in the Murrumbidgee Catchment Annual Environmental Watering Priorities for the 2019–20 water year were largely implemented as proposed under the very dry to dry conditions.

This bar chart and table provide a summary of 80,493 megalitres of water for the environment delivered in the Murrumbidgee catchment during the 2019–20 watering year. Volumes are indicative only. Watering event numbers in the bar chart and table relate to location numbers marked on the map.

Sunshower Lagoon near Darlington Point, which was hard-hit by the Millennium Drought, began its road to recovery with managed flows dramatically improving the condition of wetland vegetation including river red gums, spike rush, water ribbons and water lilies. Pumped delivery of water for the environment via a local contractor eliminated carp, which maximised the aquatic vegetation and frog response. Southern bell frogs were heard calling at the site for the first time in a decade.

These outcomes achieved the key planned actions proposed for the 2019–20 water year. 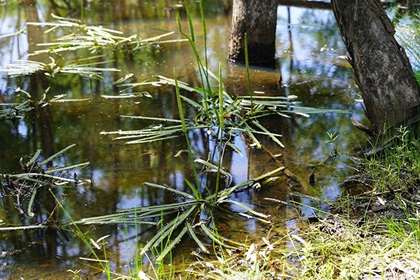 The restoration of Sunshower Lagoon has been a highlight of the Murrumbidgee watering year.

For the first time, water managers used new infrastructure to deliver water for the environment to the site. The infrastructure was co-funded by the Department of Planning, Industry and Environment (DPIE) and Riverina Local Land Services under the Boosting the Bunyip Bird Project.

DPE managed the delivery of 514 megalitres of Commonwealth environmental water to the site between the start of December 2019 and the end of January 2020.

The site had been dry since 2016 and was severely drought stressed.

River red gums were the first to bounce back after water arrived. Aquatic plants followed soon after with common rush, spike rush and water ribbon appearing in encouraging numbers and setting seed in response to the flow.

Monitoring of the flow detected the presence of endangered southern bell frogs that had not been seen or heard at the site since 2010.

A combination of factors are thought to have contributed to the success of the watering event, including timing.

The watering occurred after the carp spawning period meaning fewer small carp were present in the system. The use of carp screens further reduced the number of carp present which, in turn, reduced pressure on recovering wetland plants.