A year in the Intersecting Streams catchment: 2019–20

Outcomes from the use of water for the environment in the Intersecting Streams catchment, 2019–20.

The Intersecting Streams arise in Queensland and flow across the border into New South Wales. These streams include the Narran, Bokhara, Culgoa, Warrego and Paroo rivers and key wetland systems including the Ramsar-listed Narran Lakes, Paroo Wetlands and Yantabulla Swamp. The river systems are located on a series of semi-arid floodplains and are fed by rainfall in the central and western areas of Queensland.

Flows in these river systems are intermittent and unregulated, and flow events are typically associated with southern summer monsoonal weather systems.

The focus of water managers in 2019–20, with an expected very dry to dry resource availability scenario as identified in the Intersecting Streams Catchment Annual Environmental Watering Priorities 2019–20, was to minimise unrecoverable loss of ecological assets and functionality.

The 2019–20 water year was generally hot and dry. The Moonie, Culgoa, Narran, Birrie, Bokhara, and Paroo rivers experienced cease-to-flow conditions. Above average rainfall upstream of St George through February and March 2020 resulted in a large flow entering the Culgoa, Birrie, Bokhara and Narran rivers from the Lower Balonne.

These flows in the Intersecting Streams system in early 2020 included: 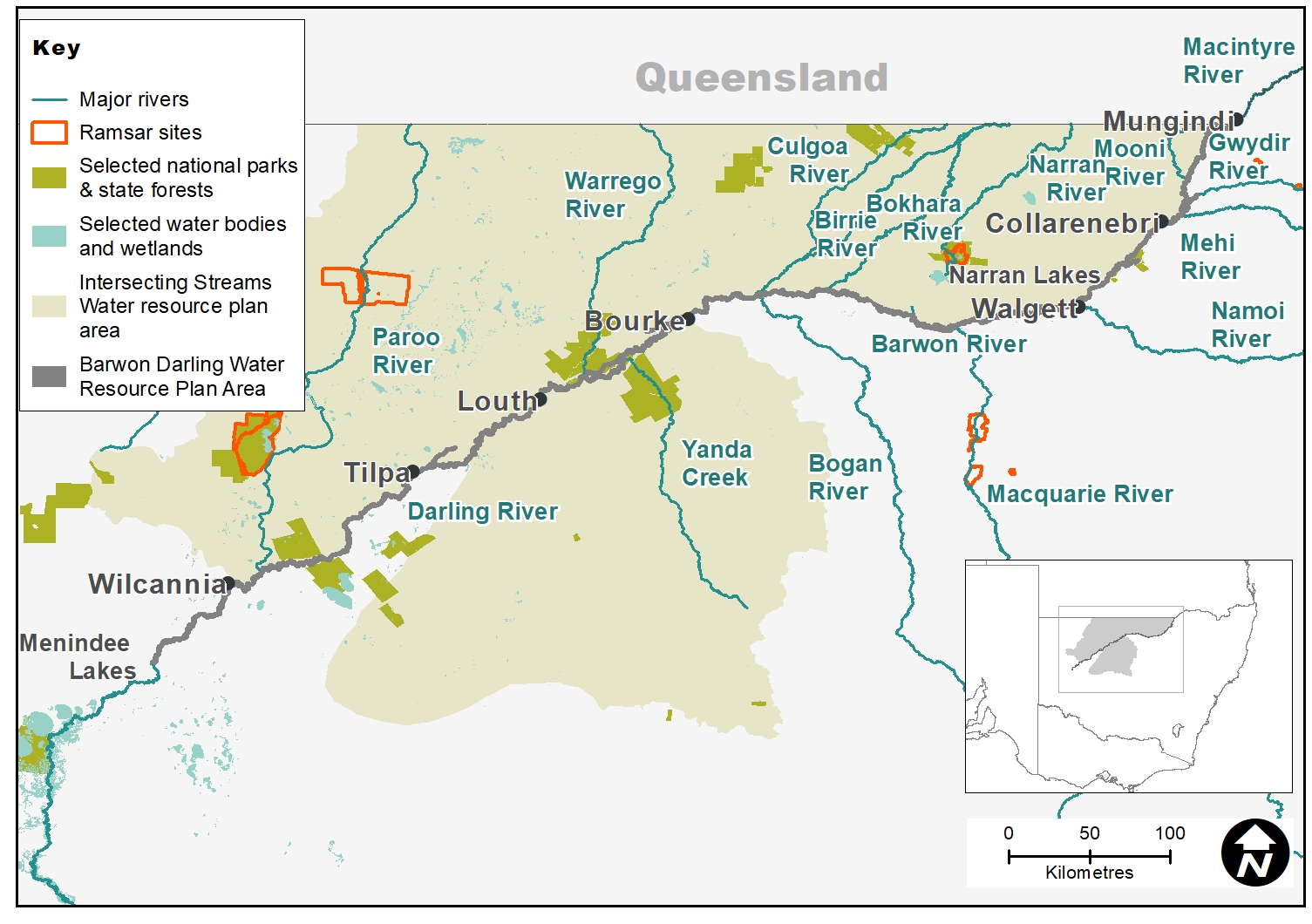 The watering aims identified in the Intersecting Streams Annual Environmental Watering Priorities for the 2019–20 water year under dry to very dry conditions were assisted by wetter conditions in early 2020 that resulted in natural flows.

Unlike regulated catchments, the management of water for the environment in the Intersecting Streams catchment is largely reliant on improving outcomes from unregulated or natural flows in the rivers. The aim is to balance flows in the rivers to meet the needs of instream ecosystems and support floodplains and wetlands.

In 2019–20 the Commonwealth Environmental Water Holder identified priority actions to guide the management of their portfolio of water licenses for this system, subject to river flows.

In the Narran system licensed water entitlements aimed to:

In the Warrego system licensed water entitlements aimed to:

These priorities included all rivers within the Intersecting Streams catchment.

Between February and April 2020, a total of 1442 gigalitres flowed past St George in Queensland and into the Culgoa, Birrie, Bokhara and Narran rivers. This large inflow from the Balonne increased resilience and replenished habitat throughout the river systems. Traditional Owners who were monitoring the Narran Lakes suggested it was primed for a bird breeding event.

Rainfall in March 2020 activated the Commonwealth’s licenses for Toorale National Park and State Conservation Area (Toorale). The Commonwealth Environmental Water Holder contributed 16.2 gigalitres of the 45-gigalitre-flow that reached the Darling River from the Warrego.

More than 11,000 hectares of floodplain at and around Toorale was inundated. The flows connected the Darling River with the floodplain via the Talowla channel for the first time since 2010. NSW National Parks and Wildlife Service (NPWS) observed brolga chicks in the national park.

Unregulated Commonwealth entitlements in the Moonie River were activated in early 2020, contributing about 4.5 gigalitres of water for the environment.

Monitoring by the Murray–Darling Basin Authority, Commonwealth Environmental Water Office, and NPWS found that some AEWP outcomes were met in early 2020, including: 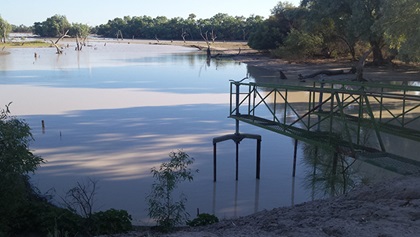 Work on the Water Infrastructure Project at Toorale National Park and State Conservation Area (Toorale) has been ongoing throughout 2019–20, led by the Department of Planning, Industry and Environment.

The largest instream barrier on Toorale, Peebles Dam, was removed in October 2019. Floods down the Warrego River since then have flowed unimpeded through this reach to the Darling River.

The next stage of the project will involve modifications to infrastructure at Boera, Homestead and Booka dams.

Designs for Boera and Homestead dam works have been finalised and a comprehensive environmental assessment completed and approved.

The project involves modifications to 4 dams that were constructed across the Warrego River to support agricultural practices associated with the former Toorale Station. These dams were initially installed as part of property improvements during the late 19th century, primarily to increase floodplain watering and grazing capacity, and in later years store water for irrigation. Historic management of the flows on Toorale using the existing infrastructure has created high conservation value aquatic and wetland habitats. However, it has also reduced instream connectivity and created barriers to fish movement within this reach of the river. The aim of the project is to: