Outcomes from the use of water for the environment in the Namoi catchment, 2019–20.

The Namoi catchment is located in north-western New South Wales covering an area of about 42,000 square kilometres. It is bordered by the Gwydir and Castlereagh catchments. The major river system is the Namoi River, with tributaries including the Peel and Cockburn rivers and Goonoo Goonoo Creek, with major water storages being Keepit, Split Rock and Chaffey dams.

Drought conditions again featured in the Namoi–Peel catchment during 2019–20. Inflows to Keepit, Split Rock and Chaffey dams remained lower than historically recorded and again, Commonwealth water for the environment was not available under general security water entitlements. Under critical drought management, no water was released from Keepit Dam except for a small stock and domestic flow to support landholders.

The Namoi River to Walgett experienced cease-to-flow conditions for nearly 10 months from April 2019 to mid-February 2020.

Storage reserves in Keepit and Split Rock dams increased from near zero to 20% and 3.5% respectively in late June. This improvement was not enough to provide allocation to environmental or general security water entitlements.

Record low inflows continued in the Peel catchment during 2019–20. Chaffey Dam storage reserves were insufficient to allow allocation to general security water entitlements, hence no water was available to support environment demands during the year.

With continuing drought, poor outlook of rain and no water allocation, the Namoi–Peel catchment had an expected very dry resource assessment scenario under the Namoi Catchment Annual Environmental Watering Priorities 2019–20. With no water for the environment available, the primary focus for water management was to improve water security for towns and, where possible, support native fish. In the Peel, as part of the NSW Government’s response to secure water for Tamworth, authorisation was given to WaterNSW to deliver town water supply via a newly constructed pipeline from Chaffey Dam linking with the existing pipeline at Dungowan. 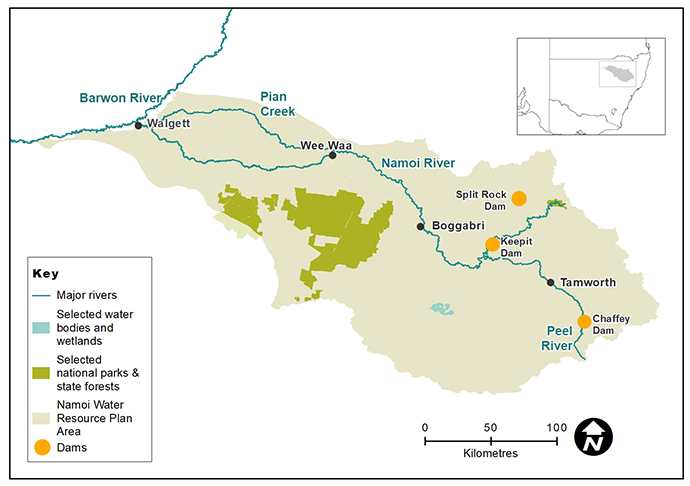 As identified in the Namoi Catchment Annual Environmental Watering Priorities for the 2019–20 water year, the focus of environmental water management during 2019–20 was to support native fish populations through:

With no available water for the environment against the backdrop of a deepening drought over winter and spring, this outcome relied on natural flow events in tributaries below Keepit, Split Rock and Chaffey dams. To help guide the sharing of natural flow events, water managers provided advice on critical environmental water needs within the NSW drought management response framework.

Water for the environment deliveries were not undertaken in the Namoi–Peel catchment during the 2019–20 watering year.

The Namoi River retracted to a series of isolated refuge pools. By December 2019, most known refuge pools below Wee Waa had dried up.

Although water for the environment wasn’t available during the water year, the Department of Primary Industry – Fisheries coordinated a native fish rescue to secure a genetic insurance population of Murray cod, and silver and golden perch. Native fish were taken from remaining refuge pools in the Namoi River between Keepit Dam and Narrabri and relocated into government and private hatcheries. The aim was for these fish to provide brood-stock to repopulate the Namoi River once drought conditions eased.

In February 2020, after 10 months of cease-to-flow conditions in the regulated Namoi River, a low-pressure system brought much needed rainfall over the Namoi–Peel catchment. The rainfall produced runoff within the Namoi tributaries that provided a large fresh along the entire length of the Namoi–Peel River to Walgett.

This end-of-system flow, combined with water generated in Queensland, contributed to replenishment of critical refuge pools along the Barwon and Darling rivers to Menindee Lakes. The overall aims identified in the Namoi Catchment Annual Environmental Watering Priorities 2019–20 were achieved, however in the Lower Namoi River a significant decline in an already poor native fish population was observed.

In November 2019, as a drought response to secure town water supply for Tamworth, the minimum daily flow rule from Chaffey Dam was suspended and authorisation given to WaterNSW to deliver water to Tamworth via a pipeline.

The authorisation was over two stages. Under stage one, flow was delivered via the Peel River to a temporary weir at Dungowan where it was captured and transferred into an existing pipeline linking to Tamworth. To mitigate the impact of cease-to-flow conditions and support refuge pools along the 28-kilometre length of the Peel River below the temporary weir, a 30-megalitre-per-week environmental water allowance (EWA) was made available. Stage two saw flows cease from Chaffey Dam and town water was delivered directly via the newly constructed pipeline.

A release strategy of 15 megalitres every 4 days was adopted. With no support from rainfall or tributary inflows, the release reached the first 3 kilometres of the 28-kilometre length of the river. Native fish deaths were reported downstream at Piallamore where flow was not supported by the allowance.

In mid-February, rainfall over the Peel catchment generated runoff into the Peel River. While 18,482 megalitres was recorded at Tamworth over 10 days, only 83 megalitres was recorded at the Piallamore river gauge over this same period. The large volume observed at Tamworth was brought in by the Cockburn River, which joins the Peel just upstream of Tamworth.

To build on the very low flow in the Peel River upstream of the Cockburn River junction, Department of Planning, Industry and Environment continued to release the available EWA. This small rain-driven flow, in combination with the EWA replenished river pools along the remaining 25 kilometres of the Peel River channel upstream of the Cockburn and Peel river confluence.