Outcomes from water for the environment in the Border Rivers catchment, 2019–20.

Severe drought conditions have been present in the region since mid-2017. In late 2019 the region remained in drought. Although rainfall occurred in early 2020, the catchment condition is still considered dry.

A flow from Glenlyon Dam was delivered in late 2019 to replenish Boggabilla Weir pool for town water supply. Following deliveries from Glenlyon Dam were deemed unviable due to the limited volume remaining in storage. Delivery of minimum daily flow requirements continued from Pindari Dam, but these only maintained flow to Ashford.

The Northern Fish Flow in early 2019 helped maintain some of the refuge pools through to February and March 2020 when significant rainfall occurred in the Border Rivers catchment. This resulted in uncontrolled flow events that restored connection along the Border Rivers and to the Barwon River. Since then flows have been maintained across the Border Rivers by subsequent smaller rainfall events and continued tributary inflows.

The planned Pindari stimulus flow was not triggered for the 2019–20 season and no releases were made under the translucency rules despite inflows being received from February to June. Translucent flows were not delivered due to valve maintenance requirements and the undelivered volume has been deferred for use in the 2020–21 water year. If inflows continue into 2020–21, translucent flows may occur from Pindari Dam. Planning is under way for the delivery of the 2020–21 Pindari Stimulus Flow and Commonwealth Environmental Water Holder held environmental water in Pindari Dam.

The focus of water managers in 2019–20, with an expected very dry to dry resource availability scenario as identified in the NSW Border Rivers Catchment Annual Environmental Watering Priorities 2019–20 was to adopt a flexible and responsive approach. This approach acknowledged natural cues and the need to meet the water needs of the environment across a range of systems and climatic conditions. 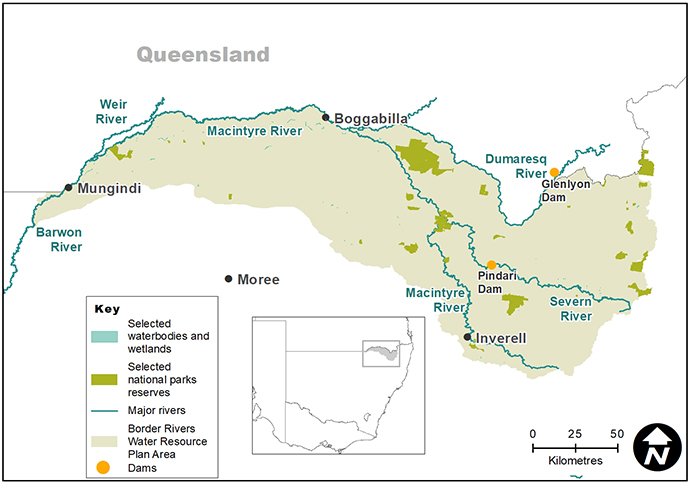 Due to lack of water availability, watering intentions under the NSW Border Rivers Annual Environmental Watering Priorities for the 2019–20 water year could not be met by active releases from Glenlyon or Pindari dams. Watering aims for very dry to dry resource availability scenarios were achieved through protections of natural events in early 2020.

No deliveries of held water for the environment were made in 2019–20.

Following the Northern Fish Flow in April–June 2019, small isolated flows were observed in the Border Rivers. The system disconnected from the Barwon River with flow deliveries downstream of Goondiwindi terminated. The Glenlyon and Pindari storages received the lowest inflows on record.

During September 2019 a flow was delivered from Glenlyon Dam to replenish Boggabilla Weir pool for town water supply. In November 2019 deliveries from Glenlyon Dam were deemed no longer viable. Delivery of minimum daily flow requirements continued from Pindari Dam, but these only maintained flow to Ashford. Wetter conditions were experienced in early 2020 allowing flows from the Border Rivers to connect with the Barwon River.

The aims of the NSW Border Rivers Annual Environmental Watering Priorities 2019–20 (AEWP) were not met by releases of water for the environment in the 2019–20 season due to water shortages in Pindari and Glenlyon dams, and later in the season as a result of an outlet valve issue at Pindari. Releases for town water supply from Glenlyon Dam to Goondiwindi and Pindari Dam to Ashford did provide some environmental benefit by helping to maintain viable refuge pool water quantity and quality.

The 3 aims of the AEWP under a very dry scenario were achieved:

No large-scale fish kills were reported in the Border Rivers. There were reports of small-scale fish kill events, but these were likely to represent only a small portion of the actual fish deaths that occurred. Large-scale fish kills may have been avoided by the release of water for the environment through the Northern Fish Flow in April–June 2019 and natural flow events in February and March 2020.

The catchment was reconnected by rainfall events in February and March, which provided unregulated flows with on-going connection since. Subsequent rain events have maintained natural flows into the 2020–21 season. Under water sharing plan rules, 25% of supplementary flows were protected from access. Further protection was achieved under a Section 324 Order across the northern Basin to protect water for critical human needs and the environment in February 2020. 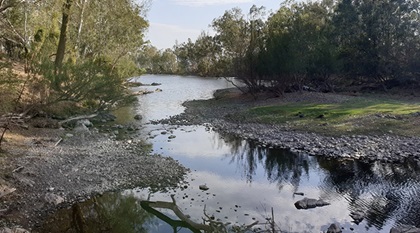 In the Severn River below Pindari Dam, flows have remained at very low levels for the entire water year due to valve maintenance issues reducing release capacity. As a result, flows under translucent flow rules could not be released. This has resulted in no environmental water requirements being met for the water year between Pindari Dam and Frazers Creek on the Severn River.

Severn River at Ashford experienced very low flows from June to December 2019. The river ceased to flow between December and late January 2020, after which small inflows from Frazers Creek provided some relief.

In the Dumaresq River at Bonshaw, cease-to-flow conditions were experienced from the start of the water year until September when a small fresh event (short-duration flow events that submerge the lower parts of the river channel) provided some replenishment. Following this event, cease-to-flow conditions returned and continued until mid-February 2020. Since then there has been a large fresh, small freshes and continual base flows. Flows were impacted during the drought because very low water levels in Pindari Dam caused deliveries to be suspended.

In the lower section of the Macintyre River at Kanowna there were cease-to-flow conditions from the start of the water year until the end of January. Flows between January and June included a small pulse, large fresh and bank full, with continual base flows in between.