The koala is a well-known and popular animal, native to Australia but recognised around the world. 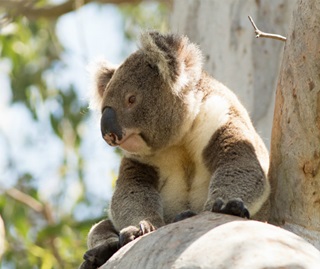 The koala is a tree-dwelling marsupial with large furry ears, a prominent black nose, long sharp claws adapted for climbing and no tail. Fur colour varies from pale grey in north Australia to grey-brown in the south.

Despite being called 'koala bears' for many years, koalas are marsupials. While bears give birth to well-developed young, newborn koalas are tiny enough to fit on your thumbnail, and are raised in their mother's pouch.

The closest relative of the koala is the wombat. Both animals have pouches which open towards the rear. This is fine for the wombat, but koalas need strong muscles ringing the pouch to keep their young from falling out.

Why are they special?

Visit the NSW Koala Country website to find out how you can help koalas.

During breeding, males advertise with loud snarling coughs and bellows. Koala mating songs range from the pig-like grunts and growls of the males, to the high-pitched sounds of the females.

Research published in The Journal of Experimental Biology and publicised by ABC Science indicates there is a variation in the bellows that correlates with the size of the male – this may be used to intimidate rivals or attract mates. 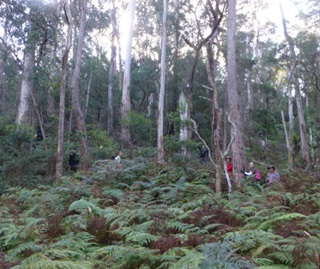 Koalas live in eucalypt woodlands and forests. Home range size varies according to quality of habitat, ranging from less than two hectares to several hundred hectares.

Koalas are found between south-eastern South Australia and Queensland. The largest koalas weigh over 10 kilograms and are found in Victoria, while the smallest live in North Queensland and weigh only 5.5 kilograms.

In NSW, koalas mainly live on the central and north coasts, with some populations west of the Great Dividing Range, on the south coast and on the southern tablelands. Most populations live in isolated habitats and many areas in which koalas are most abundant are subject to intense pressures. 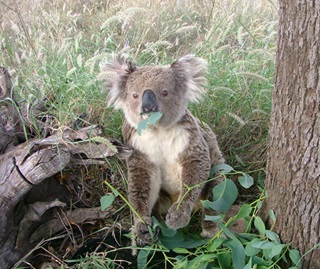 A koala eats about half a kilogram of leaves each day. Koalas are fussy eaters, choosing most of their food from a few varieties of eucalypt. Around Sydney, red gums and mahoganies are their favourites. In northern areas of the State, tallowwood and forest red gum are important, manna gum tops the bill in the south, and in the west koalas prefer river red gum and ribbon gum. They use a variety of other trees for shelter during the day and in heatwaves or storms, including paperbark, she-oak, brush box and acacia trees.

Gum leaves are not the easiest things to digest - they are tough and contain oils which can be poisonous. To cope with such an unusual diet, koalas have a long, thin tube like an appendix branching out from their intestines. This tube grows to a length of two metres. It probably helps with digestion, although its exact function remains a mystery.

As their food contains little energy, koalas conserve energy by sleeping for most of the day and looking for food in the evening. Koalas do not normally drink water, as they get enough water by licking the dew from leaves.

How do they get about? expand

With huge claws and strong muscles, koalas are able to hold on tightly to trees. They have two thumbs and three fingers on each front paw, which makes their grip more even on each side of a branch.

They also have a clawless big toe on their hind legs, which allows them to grip with their hind feet as well.

Two of their hind toes joined together form a handy two-toothed comb, used for grooming fur and removing ticks. 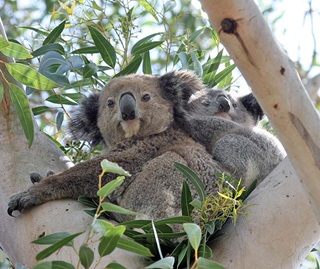 Koalas live for between 10 and 20 years, and generally breed between September and February. Female koalas can breed from about 2 years of age, and have a gestation period of about two month, producing one koala a year. On rare occasions they may produce twins.

A newborn koala is tiny, blind and hairless. Dragging itself into its mother's pouch, it attaches itself to one of her two teats. By about 7 months, the baby has outgrown the pouch. It rides on its mother's back, or rests against her chest as she drowses in the fork of a tree. During this time, the young koala samples gum leaves. When the young koala is about one year old, its mother is able to mate again.

Often, young male koalas will be driven off by older males. To survive, they must find a suitable area which is not already occupied by other dominant male koalas. Koalas are generally solitary, although they do have a social structure based on a dominant male. They rest for most of the day - at night they feed and move between trees, and sometimes along the ground.

The koala has suffered a dramatic decline in numbers and distribution since the arrival of Europeans. Surveys in NSW indicate that since 1949, populations of koalas have been lost from many localities. Most populations in NSW now survive in fragmented and isolated habitat and many of the areas in which koalas are most abundant are subject to intense and ongoing pressures.

The koala is listed as 'vulnerable to extinction' under the Biodiversity Conservation Act 2016 because of declining numbers and the ongoing pressure of threats. Such listing gives the species more protection and attention, and means proposals for development that will affect koala habitat are rigorously assessed.

In April 2012, koala populations in Queensland, NSW and ACT were listed as vulnerable to extinction under the Commonwealth Environment Protection and Biodiversity Conservation Act 1999.

Threats to koalas include:

The most significant disease in koala populations is chlamydia, a highly infectious bacterial disease. Koalas in NSW carry chlamydia pathogens but do not always show clinical signs of disease. They have symptoms such as conjunctivitis and urogenital tract infections when they are stressed by:

The disease weakens koalas, making them more vulnerable to death from other causes, particularly dog attack and severe weather conditions. Under the NSW Koala Strategy, the NSW Government is investing in research to better understand the impacts of diseases such as chlamydia on koala populations and to identify the best ways to reduce the impact. Trials are also under way in Queensland to test whether a recently developed vaccine can protect koalas from chlamydia.

As koalas generally give birth to one young a year, their populations cannot increase rapidly. However as mortality is also low, populations can double in three years in the absence of chlamydia and other threats. Local extinctions are possible where: