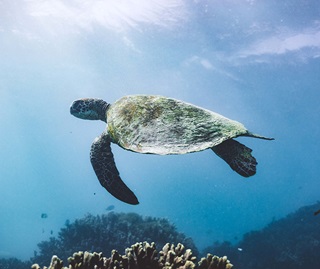 NSW beaches offer climate refugia (a location where a population can survive) as well as stretches of remote beaches where threats from visitation and development may be lessened, improving nesting success, hatchling emergence rates and survivability.

There are significant data gaps in where, when and how our beaches are being used and the prevalence and impact of threats such as disturbance, light and marine pollution as well as climate change, on these turtle species. Without this, we cannot effectively manage these threatened species which only becomes more urgent as time progresses.

The Department of Planning and Environment's Saving our Species Program has teamed up with Australian Seabird Rescue to develop NSW TurtleWatch, a citizen science program involving volunteers to collect valuable data for marine turtles nesting in New South Wales and their potential threats.

Citizen scientists will be trained in key locations across northern NSW to systematically monitor and record information of the priority areas listed below.

Successful marine turtle nesting activities have been recorded from the Tweed area to Port Macquarie and the Mid-Coast region. With such a large expanse of coastline to monitor we hope to engage citizen scientists to recognise and report turtle nesting activities. NSW TurtleWatch volunteers will be trained to recognise marine turtle species from tracks left in the sand, the difference between a real or false nest, monitor nests for signs of disturbance and report a hatching event.

Nesting temperatures can directly impact on the success of a nest as eggs require a narrow temperature range to hatch. Higher temperatures within this range also lead to more female hatchlings, leading to skewed population sex ratios with rising global temperatures. To build knowledge around nest temperatures experienced in NSW beaches, the temperature around active nests will be monitored where possible.

Marine debris is a major threat to marine ecosystems worldwide. It is known to impact turtles throughout their entire lifecycle from increasing hatchling crawl time (to the sea) leading to greater exposure to predators and plastic ingestion by adults leading to sub-lethal effects and mortality.

Beach clean-up events will be run with Tangaroa Blue and citizen scientists will collect information about the amount and origin of marine plastics found on their beaches, while removing what they find so that it does not impact the turtles. Data collected by citizen scientists will be analysed by scientists in the Department of Planning and Environment to visualise plastic pollution and the threat posed by this along New South Wales' beaches.

Artificial light at night can have negative impacts on many animals. For marine turtles, artificial light leads to disorientation, reducing the number of successful nesting attempts and causing hatchling mortality. In New South Wales we have little data around the type of light conditions marine animals experience on our beaches. Citizen scientists will build this data by measuring light pollution at our beaches and nesting sites, creating a light profile for each beach over different astral and cloud conditions, to assess and manage this threat.

The change in the beach shape due to sediment erosion and accretion over time is important to monitor as eggs within the sand may be exposed or buried, leading to mortality. The shape of the beach can also affect the ability of a female turtle to find a suitable nesting site. This information will give scientists and local councils an indication of how beach change poses a significant risk to nesting and hatch success.

Volunteers will also engage with beach users to share their knowledge on threats facing marine turtles, how their behaviour can impact on turtles and what they can do to help.

How to get involved

The project is currently being established and some sampling may begin at the tail end of the nesting season (Dec-March). Light and marine debris sampling activities will begin in early-mid-2020 and extensive turtle monitoring will begin in time for the 2020-21 nesting season.