Several thousand plant species grow in wetlands, ranging from mosses and grasses to shrubs and trees.

Different kinds of wetland are home to different types of plant, depending on 2 main factors:

Other factors include whether there’s surface or underground drainage, what the soil is like, the temperature in the region, the amount of rainfall and the area’s topography (its physical features).

Wetlands in New South Wales can be categorised in 3 ways, depending on the types of plant they support:

Plants that grow in wetlands

They can be divided into 3 groups that are dominated by different types of plant.

They are dominated by lignum, river red gum, black box, coolabah and other plants that thrive in dry areas. These species can tolerate years of drought or low river flows.

These are usually flooded every year.

They are dominated by sedges, rushes, spike-rushes, water couch, common reed, and herbs and forbs such as water primrose and nardoo.

These are always or nearly always flooded.

They include montane lakes and are dominated by aquatic plants such as ribbonweed and wavy marshwort.

Plants in coastal wetlands have become especially adapted to different levels of salt in the water.

Wetland plants provide habitats for many animals by providing a place for breeding, feeding and hiding.

Many birds live or take cover in shrubs and rushes in inland wetlands. These plants include lignum, a shrub used by ibis and other waterbirds for nesting, and cumbungi and Juncus, rushes used by swamp hens and ducks. 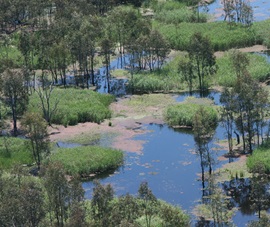 Both living and dead trees provide habitat for many animals.

River red gums provide nesting habitat for waterbird species. They also provide hollows for marsupials such as the endangered squirrel glider, and for birds including the superb parrot. This parrot breeds in red gum forests along the Murray and Murrumbidgee rivers.

Mangroves in coastal wetlands provide protection for many fishes to spawn and provide roosting habitat for waterbird species.

Many wetland plant communities are protected because they’ve been listed as endangered under the Biodiversity Conservation Act 2016.

Without this protection, they would face the following threats:

Some wetland plant communities are also protected because of their unusual ecological characteristics or because they’re the only example of their kind.

Deliveries of environmental water typically extend the duration and extent of flooding. This enables plants and animals to breed successfully and ensures that wetland species and ecosystems survive and thrive.