Many reptiles are dependent on NSW wetlands, including freshwater turtles, water skinks, snakes and water dragons.

Some reptiles – such as freshwater turtles – live in wetlands for a large part of their life cycles.

Others – such as water skinks and red-bellied black snakes – rely on wetlands sometimes and spend the rest of their lives on dry land, usually quite close to streams or open water. 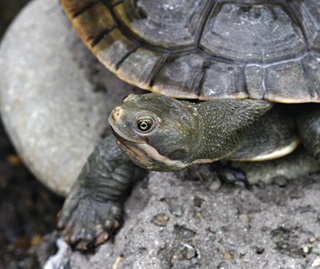 The eastern water dragon lives in coastal waters, including marine wetlands. It is a good tree climber and likes to laze on branches overhanging the water.

Why do reptiles need wetlands?

Reptiles that use wetlands do so because they either live in water for much of their lives or rely on water for their survival. They also find plentiful food sources in wetlands, in the form of other animals.

Reptiles rely on wetlands in the following ways:

Threats to reptiles in wetlands 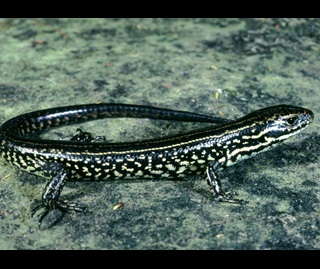 The Blue Mountains water skink is listed as endangered in NSW under the Biodiversity Conservation Act 2016.

It has been identified in only 40 locations in swamps in the Newnes Plateau and Blue Mountains. It faces a number of threats that lead to a loss of its habitat, including urbanisation, climate change, bushfires and agriculture.

Freshwater turtles face similar threats, as well as others threats such as predatory behaviour by foxes and pigs, which rob their nests and consume their eggs.

A study on freshwater turtles in the Lowbidgee floodplain found they responded well to flooding because it allowed them to move between sites.

The study recommended maintaining refuge sites for adults during droughts and connecting habitats to enhance feeding and dispersal after flooding.