Huge numbers of birds spend all or part of their life cycles in wetlands, which provide habitat and food sources for them to survive. 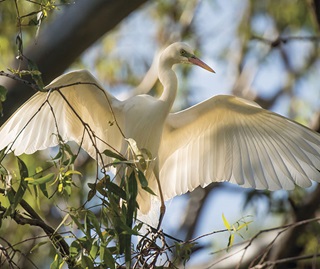 They fall into 3 main categories:

Other native bird species also depend on wetlands for all or part of the life cycle. These include reed-warblers, grassbirds and birds of prey such as the swamp harrier and white-bellied sea-eagle.

Birds that live in wetlands

Floodplain wetlands make up most of New South Wales’s wetland area and provide important habitat for waterbirds. Many species depend on them for breeding.

Some sites regularly support more than 20,000 waterbirds. This figure rises to more than 100,000 during large floods.

At those times, the internationally significant Macquarie Marshes, Gwydir Wetlands and Narran Lakes support some of the largest breeding colonies of straw-necked ibis, intermediate egret and rufous night heron in southern Australia.

Some waterbird species are thought to breed almost entirely within the Murray–Darling Basin wetlands. They include glossy ibis, freckled duck and blue-billed duck.

Birds that stop over in wetlands

Many coastal and inland wetlands support a variety of migratory waterbird and shorebird species. These birds travel each year between their breeding grounds in the northern hemisphere and non-breeding habitats in Australia.

The Hunter Estuary Wetlands provide habitat for more than 100 species of waterbirds, including 45 species listed under international migratory waterbird agreements that Australia has with Japan, China and the Republic of Korea.

The wetlands in Botany Bay support up to 34 migratory species, including the endangered little tern and an endangered shorebird community at Taren Point.

Myall Lakes can support up to 22 migratory species, including the eastern curlew, red-necked stint and bar-tailed godwit.

Delivered in collaboration with the University of NSW, the Murray–Darling Basin Authority and 3 other state-based natural resource agencies in Queensland, Victoria and South Australia, the Eastern Australian Waterbird Survey is one of the largest scale and longest running wildlife surveys on Earth.

Every October since 1983, major wetland sites in the Murray–Darling Basin have been surveyed to understand the ecosystem health of wetlands and rivers. The survey counts 50 waterbird species. The waterbirds are indicators of wetland health, and their population trends over time are indicative of biodiversity trends and ecosystem health in the wetlands.

The Eastern Australian Waterbird Survey report 2021 was released in December 2021.

You can find out more about previous survey data and results of the Eastern Australian Waterbird Survey on the University of NSW's website.

You can read more about how the survey is conducted in our Science and Research News.

Why do birds need wetlands?

There are 3 main reasons why birds need wetlands: for feeding, breeding and as a place to refuel and rest during migrations.

They don't necessarily stay in one wetland area, but will move between them. For example, many waterbirds regularly move to newly flooded habitats to feed and/or breed before that wetland dies out.

Equally, semi-permanent, permanent and coastal wetlands provide refuge for birds when wetlands in other regions are dry for long periods.

In general, most waterbird species are dependent on aquatic food sources including wetland vegetation, aquatic invertebrates, fish and frogs.

For this reason they rely on different types of wetland.

Heavy rainfall in inland NSW can cause widespread flooding and a large increase in waterbird numbers, especially in spring and summer.

That’s because flooding leads to higher levels of the food that waterbirds feed on. This in turn provides ideal breeding conditions for many waterbirds.

For example, grey teals have been tracked with satellite transmitters moving 980 kilometres in 40 hours between rice-growing areas in southern NSW and Lake Eyre.

Migratory shorebirds rest and feed in NSW wetlands and other parts of Australia from September to March to prepare for their annual migrations to breeding grounds in the Arctic.

These birds travel to breed in Alaska, Siberia, Mongolia, northern China or Japan, and then back again at the end of the breeding season. They fly continuously between stop-over sites, which need to be safe places to rest and refuel.

Migratory shorebirds such as sandpipers, dotterels and plovers also use inland wetlands when the habitat is suitable – for example as wetlands dry out after flooding to reveal shallow muddy feeding habitat.

Many species are threatened by the loss and degradation of wetland habitats. This can be caused by:

In 2016 waterbird numbers in Eastern Australia were at their lowest level since records began 34 years earlier as part of the Eastern Australian Aerial Waterbird Survey. This was despite the period of May to September 2016 being the wettest on record.